A Decade of Earth Observations 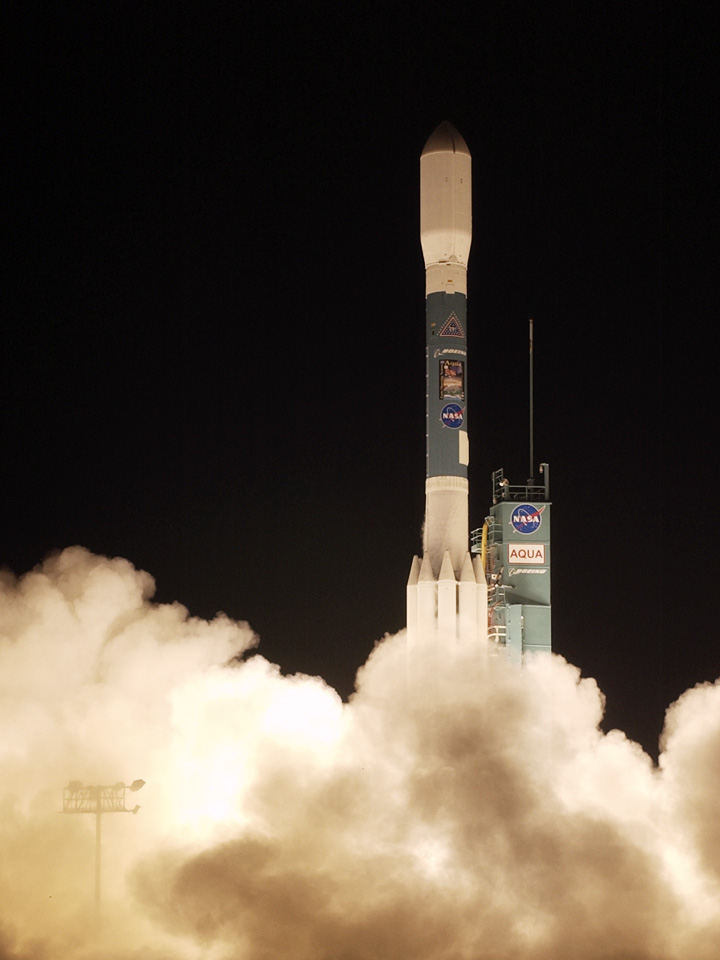 When the Aqua satellite lifted off from Vandenberg Air Force Base on May 4, 2002, it wasn’t clear how long the 2,900 kilogram (6,400 pound) spacecraft would last. There’s much that can go wrong in the unforgiving environment of space. And for a satellite that orbits more than 705 kilometers (435 miles) above the surface and cruises about 27,000 kilometers (16,800 miles) per hour, stopping for repairs is not an option when things break.

At the time, engineers expected Aqua’s mission would be between three and five years. Ten years later, the spacecraft and the six science instruments on board are still going strong. Aqua has collected a remarkable 29 million gigabytes of data throughout the last decade. (For perspective, one gigabyte holds the contents of about 10 yards of books on a shelf; 100 gigabytes would hold a floor of books in an academic library).

Project scientist Claire Parkinson expected Aqua's sensors would improve weather and climate forecasts due to their ability to precisely measure water vapor in the atmosphere, liquid water in the ocean, and the solid water in ice and snow. What she didn’t expect was how much Aqua would contribute in other ways. According to Parkinson, researchers have published more than 2,000 papers based on Aqua data over the past decade. The majority of these were based on data from the Moderate Resolution Imaging Spectroradiometer (MODIS), an instrument that measures both visible and infrared radiation, and monitors an array of environmental phenomena.

Aqua has had an impact beyond the scientific community. The satellite is used to monitor and forecast a broad range of natural hazards that affect all of us, ranging from severe storms to dust storms and haze to droughts and crop health. Aqua’s MODIS instrument has had a particularly dramatic impact on our ability to monitor the world’s fires, detecting more than 20 million actively burning fires to date.

The recently-launched Suomi NPP satellite has a number of instruments that will continue data records begun by Aqua should the satellite's vision go dark. But here’s hoping Aqua will continue collecting data for another ten years. Check out a new gallery of a few of our favorite images from Aqua.