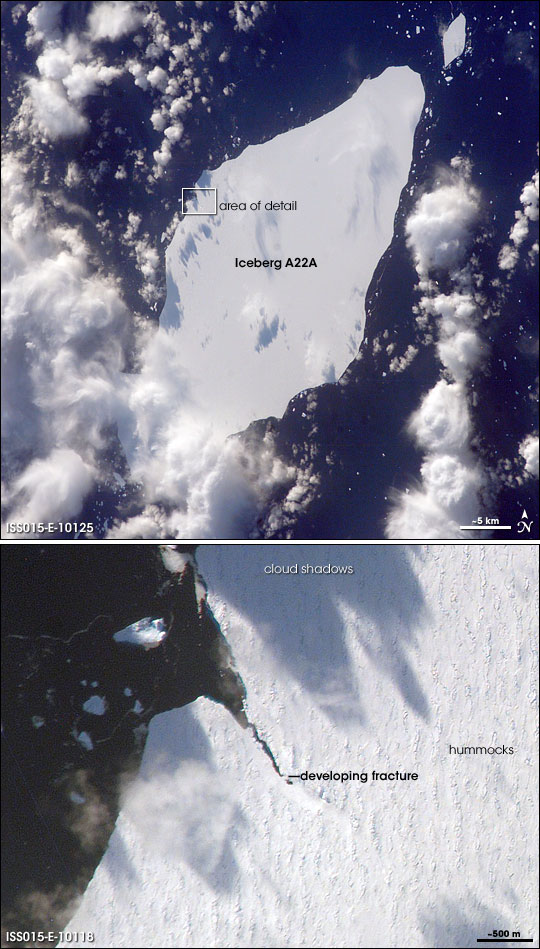 These astronaut photographs illustrate the remains of a giant iceberg—designated A22A— that broke off Antarctica in 2002. The iceberg was photographed on May 30 at a location of 49.9 degrees south latitude, 23.8 degrees west longitude, which is about a third of the distance from South America towards Cape Town, South Africa. A22A is one of the largest icebergs to drift as far north as 50 degrees south latitude, bringing it beneath the daylight path of the International Space Station (ISS). Crew members aboard the ISS were able to locate the ice mass and photograph it, despite the great masses of clouds that often accompany winter storms in the Southern Ocean. The crew’s viewing angle was oblique (not looking straight down) from a point to the west of the berg, and the time of day was early afternoon, as shown by the orientation of the cloud shadows. Dimensions of A22A in early June were 49.9 by 23.4 kilometers, giving it an area of 622 square kilometers, or seven times the area of Manhattan Island.

Once the ISS crew had located the iceberg, they managed to photograph it successfully with the “long”, 800-mm lens that provides close-up photos (lower image). Handling the longer lens requires practice. Because of the speed of the spacecraft and the length of the lens, it is necessary for the astronaut to “track” the target, that is, to swing the camera slowly to keep the target in the middle of the camera’s view finder. If the photographer tracks too slowly or too quickly, the image looks smeared.

Images of the iceberg are being acquired from the ISS to support a study of massive icebergs—part of NASA International Polar Year activities. The study will increase understanding of the way ice sheets evolve as climate changes. When large masses of ice float into warmer waters north of their usual latitudes, they undergo change at rapidly increased rates. Changes that would take decades to occur in Antarctica can happen in a few years or even months in the warmer conditions at 50 degrees south latitude. The crew of the ISS will continue to collect imagery of the accelerating breakup of iceberg A22A as weather, orbital, and illumination conditions allow.

More information, including Webcams, on the studies conducted on A22 and at other places in the Antarctic can be found at www.thistle.org and the National Snow and Ice Data Center’s Icetrek Website.

The featured astronaut photographs ISS015-E-10125 (upper image) and ISS015-E-10118 (lower image) were acquired May 30, 2007, with a Kodak 760C digital camera using 180mm and 800mm lenses respectively, and are provided by the ISS Crew Earth Observations experiment and the Image Science & Analysis Laboratory, Johnson Space Center. The images have been enhanced to improve contrast. The International Space Station Program supports the laboratory to help astronauts take pictures of Earth that will be of the greatest value to scientists and the public, and to make those images freely available on the Internet. Additional images taken by astronauts and cosmonauts can be viewed at the NASA/JSC Gateway to Astronaut Photography of Earth.

The iceberg A22A was photographed when it was about a third of the distance from South America towards Cape Town, South Africa. A22A is one of the largest icebergs to drift as far north as 50 degrees south latitude, bringing it beneath the daylight path of the International Space Station (ISS). A series of parallel lines can be seen in the lower image. These are probably “hummocks,” dunes of snow that have solidified, and they date back to the time when the iceberg was connected to Antarctica. A developing fracture in the ice can be seen in the lower, detailed view.