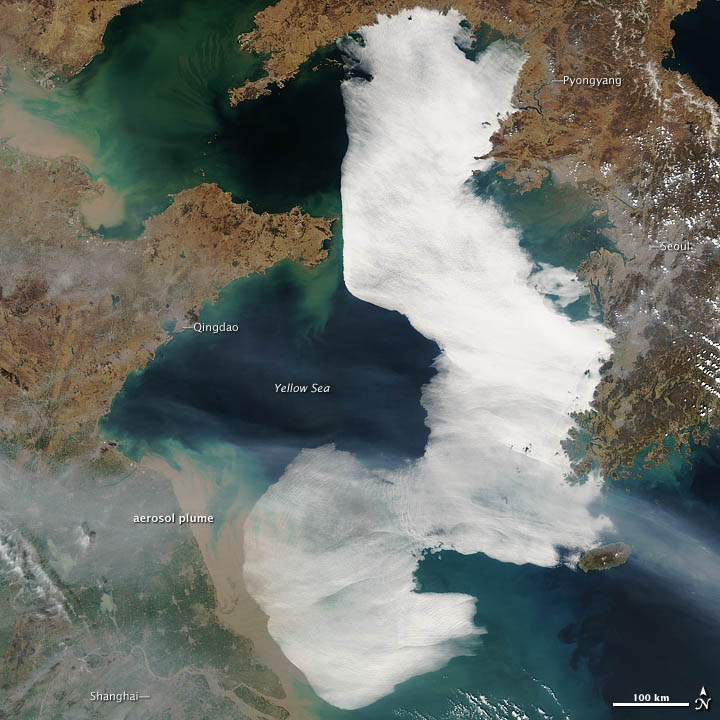 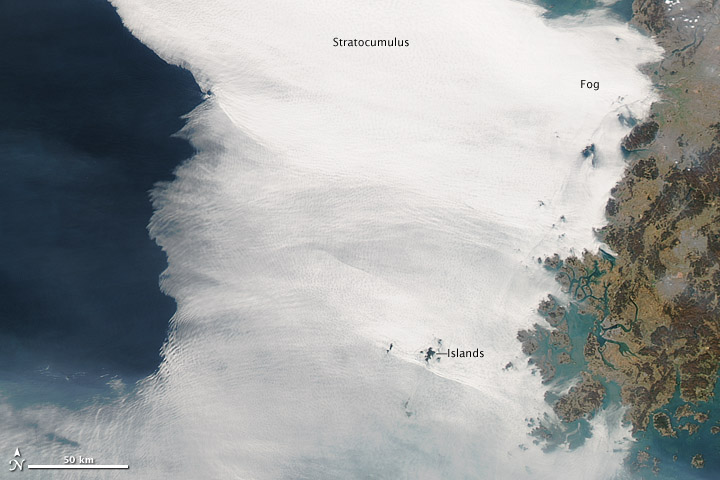 In spring, it’s not uncommon for a cloak of thick fog to cover the Yellow Sea. The shallow sea, which has a number of busy ports, usually sees 50 foggy days a year; some weather stations in the area have measured fog on up to 80 days.

One of those days was March 28, 2012, when the Moderate Resolution Imaging Spectroradiometer (MODIS) on the Aqua satellite captured this natural-color image (top) of a fog bank hugging the Korean coast. The low-lying cloud formation covered an area roughly the size of the Korean Peninsula, stretching nearly 900 kilometers (400 miles) from Korea Bay to the Chinese city of Shanghai.

The fog is generally thickest along the edges, where the cloud surface appears quite smooth in the satellite image. Closer to the middle, the surface has a more textured appearance (see lower image), indicating possible convection and the possible presence of stratocumulus clouds. These clouds form higher in the atmosphere than fog and do not affect visibility at the sea surface. An aerosol plume, likely haze emanating from industrial areas in China, is also visible and has caused the lower half of the cloud to appear slightly grayer than the upper half.

Atmospheric scientists Peter Norris and Gary Partyka of NASA’s Goddard Space Flight Center simulated the meteorological conditions that might create such a cloud formation with the Goddard Earth Observing System (GEOS-5) model. They found that it was likely advection fog.

This type of fog generally forms when warm, moist air is pushed by winds over a cooler surface. In this case, northeasterly winds pushed a tongue of warm air out over the cooler Yellow Sea. (The water is cooler because sunlight warms it less quickly than the land surfaces surrounding it, and because ocean currents off the west coast of Korea tends to bring cold water to the surface).

According to research conducted by scientists at the Ocean University of China, the season for advection fog usually starts in early April and ends in August as a result of shifting regional wind patterns. Generally the fog lasts about two days; but once in 1977, an exceptionally long-lasting fog event spanned 10 days.

Sea fog can pose a significant hazard to ships around the Yellow Sea, with low visibility leading to accidents. About half of the collisions at the large Chinese port of Qingdao are caused by fog, according to statistics compiled by the Chinese government.

The sharp western edge of the fog cloud is another compelling aspect of the image. According to Shang-Ping Xie, an atmospheric scientist at the University of Hawaii, MODIS images of sea fog in the Yellow Sea often show sharp edges, but the mechanism that causes them to form isn’t clear. “It’s an area for future research that requires in situ observations and would be a good topic for future field campaigns,” Xie noted in an email.