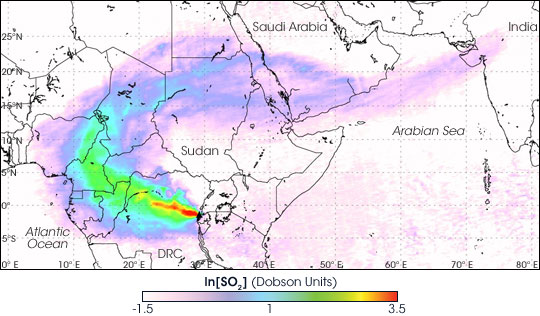 Around 10:00 p.m. local time on November 27, 2006, Mount Nyamulagira erupted. Situated near the city of Goma in the eastern Democratic Republic of Congo (DRC), the volcano posed a danger to nearby wildlife as the animals could fall ill after eating ash-coated vegetation. Although the full impact of the eruption was not immediately known, the city of Goma appeared safe from any resulting lava flow as another volcano, Mount Nyiragongo, would block the lava, according to the Associated Press.

Besides ash and possible lava, the volcano also released sulfur dioxide. The Ozone Monitoring Instrument on NASA’s Aura satellite tracked the emission of this gas from the volcano from November 28 to December 4, 2006. In this image, the sulfur dioxide concentrations are shown using a logarithmic color scale, where the values increase exponentially instead of linearly. (In other words, the value at the top of the scale is actually almost 149 times larger than the value at the bottom of the scale.) The units measured are Dobson Units. If all sulfur dioxide in the air column were flattened into a thin layer at the Earth’s surface at a temperature of 0 degrees Celsius, one Dobson Unit would make a layer of sulfur dioxide 0.01 millimeters thick. The greatest concentrations appear in red, and the smallest concentrations appear in pale pinkish-lavender. The sulfur dioxide was most concentrated around the eruption site and thinned as it moved away. The plume first traveled westward then moved in a clockwise direction toward the northeast, eventually reaching India.

According to the U.S. Environmental Protection Agency, sulfur dioxide can contribute to upper respiratory infections, and can exacerbate heart and lung ailments. It can also cause acid rain. Likewise, sulfur dioxide can affect climate because it changes to sulfate particles. Since sulfate particles are bright, they reflect sunlight, and if an eruption is strong enough to boost these particles into the stratosphere, where they are not washed out by rainfall, they can cool the climate for more than a year.

Nyamulagira (also known as Nyamuragira) is one of Africa’s most active volcanoes, if not the most active. About 25 kilometers north of Lake Kivu, and located to the northwest of Nyiragongo Volcano, it contrasts with its tall, steep-sided neighbor. Nyamulagira is relatively short. It is a shield volcano with gentle slopes. Shield volcanoes derive their name from their resemblance to metal shields warriors once used. Major eruptions at Nyamulagira have occurred recently enough to change the volcano caldera’s structure since the early 20th century.