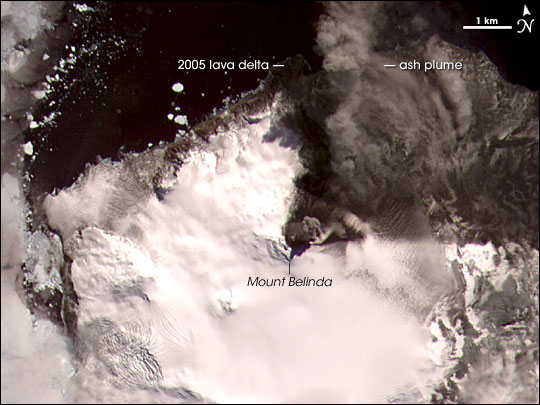 In late October 2006, Mount Belinda, on Montagu Island in the South Sandwich Islands, continued emitting volcanic ash and lava in what had become a five-year-long eruption. The volcano’s first recorded eruption began in October 2001, and its activity escalated in 2005. In September 2005, Mount Belinda produced a lava flow that traveled 3.5 kilometers (2 miles) from Mount Belinda to the sea. That lava eruption left a 500-meter-wide lava delta, still visible more than a year later.

On October 28, 2006, the Advanced Spaceborne Thermal Emission and Reflection Radiometer (ASTER) on NASA’s Terra satellite captured this image of Montagu. This image shows an ash plume covering the northeast quadrant of the otherwise snowy island. It also shows the remains of the 2005 lava delta, to the left of the ash plume.

The volcanic island of Montagu is the largest of the remote South Sandwich Islands in the Southern Atlantic. The island is a shield volcano. Shaped like a giant shield with gently sloping sides, it results almost entirely from lava flows. Montagu rises roughly 3,000 meters from the ocean floor between the islands of Bristol and Saunders. Most of the island is covered with ice, and its glaciers often form vertical cliffs on their way to the sea. This image shows that, along the southern rim of the island, ice and snow have formed rippling patterns resulting from vertical drops in the snowy surface.