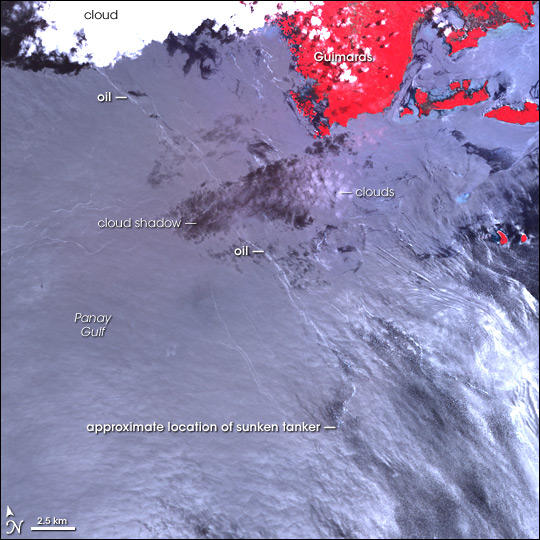 Strong winds and high waves capsized a tanker off Guimaras Island in the Philippines on August 11, 2006, spilling more than 200,000 liters of bunker oil into the Panay Gulf, said the Philippines National Disaster Coordinating Council. Long strings and patches of oil still drifted over the water on August 29, 2006, when the Advanced Spaceborne Thermal Emission and Reflection Radiometer (ASTER) on NASA’s Terra satellite captured this image. The oil is grey-white against the mirror-like surface of the water. The bulk of the oil has drifted northeast of the crash site, along the edge of ASTER’s field of view, but long streamer-like tendrils also extend north and west of the ship. Dark patches on the water are cloud shadows or areas of still, smooth water. Land is dark red.

By August 29, the government of the Philippines reported that the oil covered 245 kilometers of coastline; 16 square kilometers of coral reef area; 1,128 hectares of mangrove area; and 1,143 hectares of a marine reserve. At least 17,435 people had been affected by the spill, and many coastal residents were evacuated because of toxic substances on the shore. Even as the Petron Corporation—the ship’s owner—and the Philippine Coast Guard led efforts to clean up the spill, fresh oil was seeping from the sunken tanker on August 29, said the UN Office for the Coordination of Humanitarian Affairs. The tanker had been carrying more than two million liters of oil when it went down.