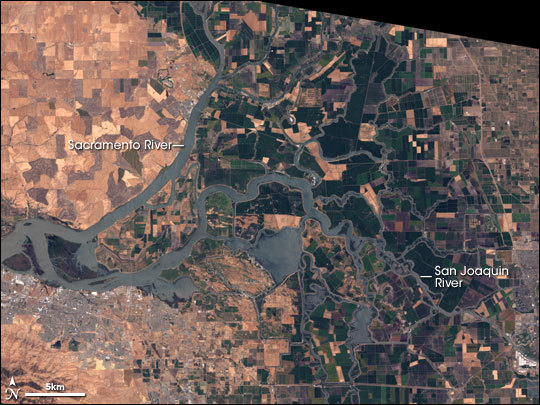 Between the two of them, the Sacramento and the San Joaquin Rivers drain most of the state of California, collecting and concentrating rainfall and snowmelt form the Sierra Nevada and funneling it toward San Francisco Bay. On the western side of the great Central Valley in northern California, the two rivers flow together into an inverted delta before heading westward into the bay. An is the name geologists give to river deltas in which the braiding and branching out of the river channel occurs inland, before the river actually reaches the large body of water toward which it flows.

This Landsat image shows the joining of the Sacramento and San Joaquin Rivers just north of the city of Antioch (bottom left). Near their confluence, the Sacramento and San Joaquin Rivers fan out and drop their sediment in the Central Valley before rejoining and flowing out toward the Pacific Ocean. This inland sediment-delivery system is one reason why the soils are so fertile and why farming is so productive in the valley. Pumping stations and river-sized canals deliver Sacramento Delta water to farms and cities across the Central Valley. The lush green agricultural land dominates the eastern side of the image.

Although the pumping allows productive agriculture in places of California where rainfall and natural stream flow wouldn't sustain such high-yield farming, the pumping may be having a downside. Scientists are becoming alarmed about the state of a range of fish populations in the Sacramento Delta. According to a report from National Public Radio in late November 2005, populations of several species of fish in the delta hit record lows in the previous three years. The decline has been rapid and surprising to many scientists, and although several explanations are being considered—toxic run-off, drought, invasive species—increasing delivery of water from the delta to agricultural areas farther south during the winter months appears to be the most likely culprit.