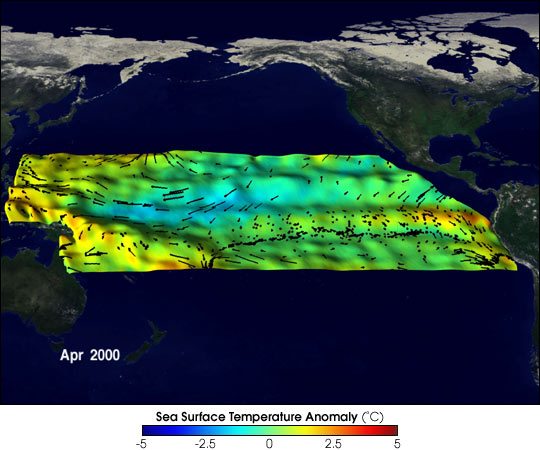 La Niña, the large area of cold water in the Pacific Ocean widely blamed for last summer's drought and often related to an increase in the number of hurricanes that make landfall, appears to be on its last legs. According to the latest spacecraft and ocean buoy observations, the La Niña has disappeared entirely in the eastern Pacific Ocean and is rapidly disappearing over the rest of the Pacific.

"The current lack of cold water support below the surface means that this La Niña will have a difficult time sustaining itself for much longer," according to David Adamec, a research oceanographer at Goddard Space Flight Center in Greenbelt, Md. "As expected, the La Niña reached a maximum in intensity during January 2000 and has been waning ever since."

The spacecraft data have also shown that since March, La Niña's cold surface water is being replaced by water that is now 4 degrees Fahrenheit warmer than normal off the coast of South America. The current longevity of this "warm water patch" is now beginning to affect the atmosphere by weakening the trade winds there. These weakened winds are also very unfavorable for the persistence of La Niña conditions.

Should the current trends continue and the winds continue to weaken, there is potential for processes to be set in motion that will allow the warm water in the western Pacific to enhance and expand the surface warming that has already taken place in the eastern Pacific Ocean. Scientists will be carefully monitoring the situation as changes in tropical Pacific Ocean temperatures ultimately affect weather in many parts of the U.S.

For more information, see What is La Niña?