The Evolution of Hurricane Irene 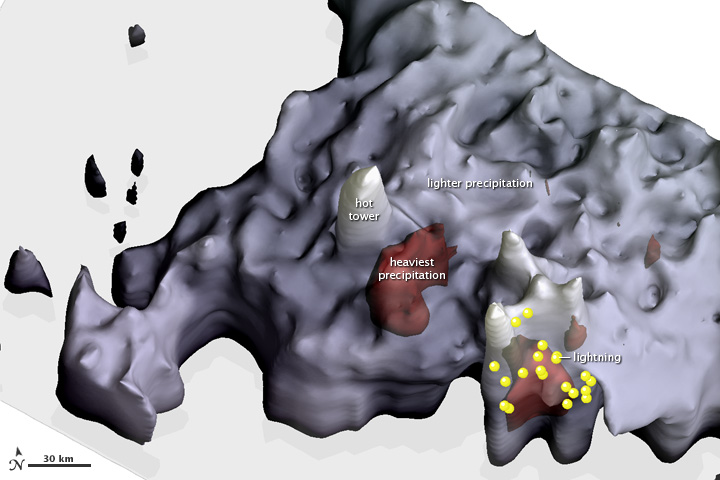 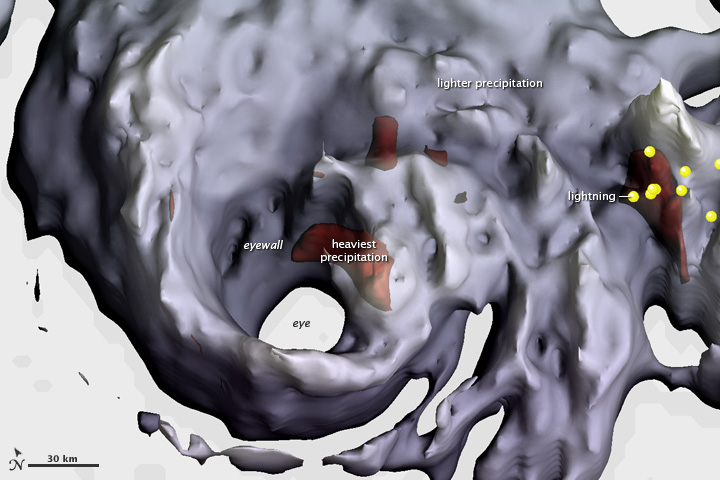 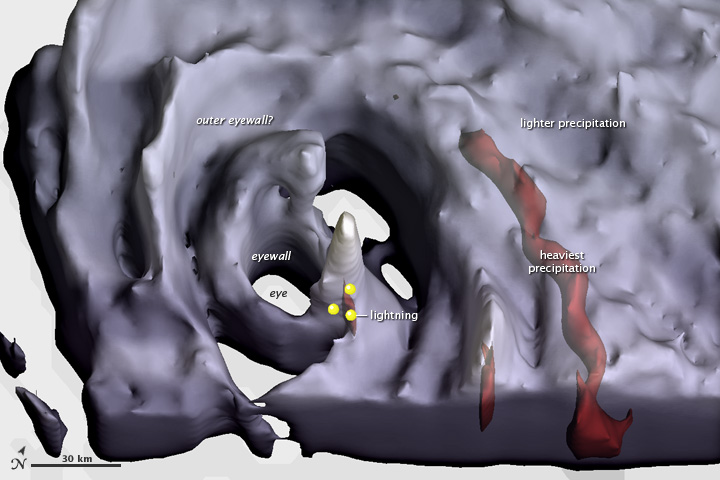 The typical view of a hurricane shows cloud structure, but these unique images show the three-dimensional distribution of rainfall within Hurricane Irene. Made from data from the radar on the Tropical Rainfall Measuring Mission (TRMM) satellite, the images cover Irene’s development from a tropical storm on August 21 to a Category 3 hurricane on August 24. The images also show the locations of TRMM-observed lightning flashes, which are indicated with yellow circles. These views of the storm’s inner core provide insight into the hurricane’s structure, which can help forecasters predict how the storm will develop.

For example, lightning in the inner core generally suggests the presence of strong updrafts and large ice particles. By implication, lightning suggests that convective cells are pumping a lot of latent heat energy into the tropical cyclone’s central vortex, which is favorable for intensification. Hurricane eyewalls often are devoid of lightning, as is the case for Irene on August 23, 2011 (center image). Category 3 Irene on August 24 (lower image) did have lightning flashes in the eyewall, and there were many flashes during Irene’s tropical storm phase on August 21 (top image).

On Sunday, August 21, Irene was only a tropical storm, and the TRMM Precipitation Radar reveals that it had an impressive hot tower that reached over 9.5 miles high (15.75 km). Strong radar signals, perhaps from large ice particles are shown in red at the base of the hot towers, which suggests strong updrafts were present in order for the ice particles to have time to grow large. Strong rain had yet to completely encircle the eye, as is typical of tropical storms. Because such towering clouds feed energy into the storm, they are a sign that the storm is likely to intensify.

On Tuesday, August 23, (center) Irene was a category 1 hurricane, in the process of intensifying to category 3 in less than 12 hours. Consistent with intensification, the TRMM radar showed that Irene had a complete eyewall circling its eye along with a region of intense convection on the eastern side of the eyewall (right side of image). Some studies suggest that bursts of convection in one portion of a hurricane’s eyewall may help to pump latent heat into a hurricane and thereby assist with intensification.

By mid-day Wednesday (lower image), Irene had reached the status of a “major” hurricane, at Category 3 strength. The observations of the TRMM radar show a compact eyewall, with the possibility that an outer eyewall is forming. Double eyewalls can be part of an eyewall replacement cycle associated with changes in hurricane intensity, either increases or decreases that are difficult to predict. Lightning was detected in the eyewall, further evidence of the energy that convection is pumping up from the ocean into the atmosphere.

This series of images provide a 3D map of rainfall inside Hurricane Irene as the storm developed between August 21 and August 24, 2011.