Flooding in Angola and Zambia 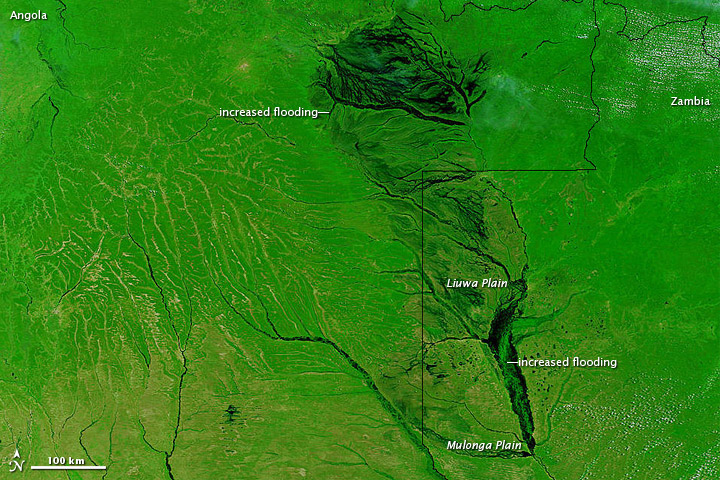 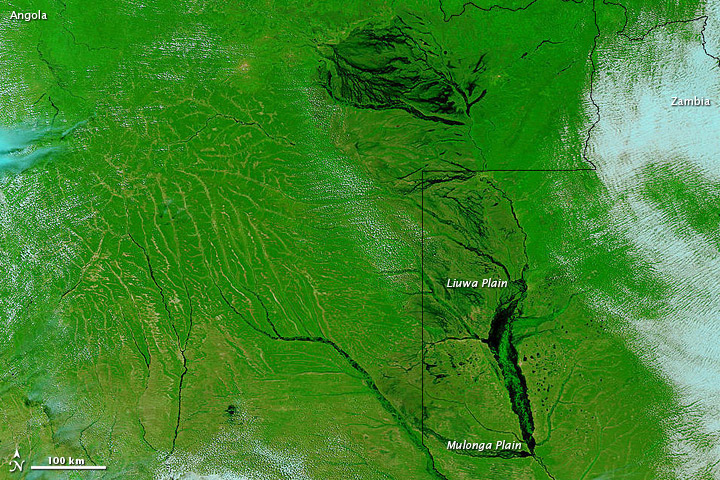 From April 4 to 10, 2011, little or no rain fell in many parts of southern Africa, prompting the United Nations Office for the Coordination of Humanitarian Affairs (OCHA) to report that “the current rainy season appears to be drawing to a close.” The OCHA was, however, appealing for flood relief funds for several southern African countries.

As clouds finally retreated, the Moderate Resolution Imaging Spectroradiometer (MODIS) on NASA’s Terra satellite managed to acquired a nearly cloud-free image of southern Africa in mid-April 2011. Derived from that acquisition, the top image on this page covers part of Angola and Zambia on April 14, 2011. The bottom image shows the same area nearly a year earlier, on April 27, 2010.

These images use a combination of infrared and visible light to increase the contrast between water and land. Water appears navy. Vegetation, even sparse vegetation, appears bright green. Clouds vary in color from sky blue to off-white, and often cast dark shadows onto the land surface below.

Both images show the region at the end of rainy season, when many areas are typically flooded, but a close look reveals higher water levels in 2011. Low-lying floodplains run roughly north-south through eastern Angola and western Zambia, and regularly fill with water during the rainy season. Liuwa Plain is generally flooded from late December into June. Although the area appears drenched in both years, the extent of flooding appears greater in 2011. This is consistent with OCHA reports of an unusually severe rainy season in 2011.