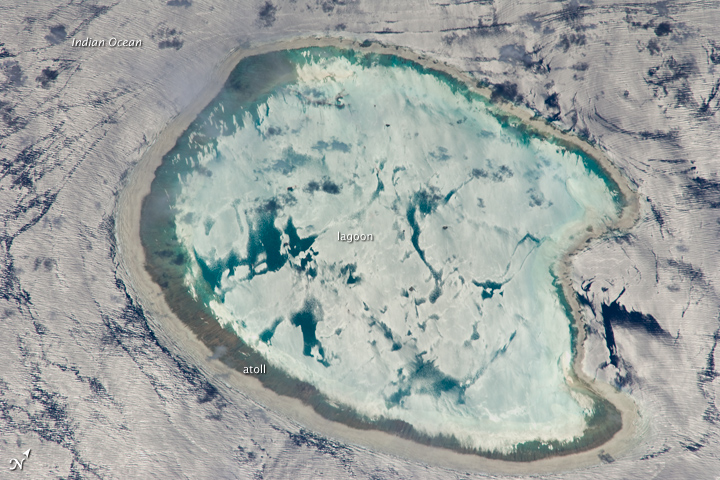 The vantage point on the International Space Station provides astronauts with many dramatic views of Earth. Occasionally those views become spectacular. This photograph of the Bassas da India, an uninhabited atoll in the Indian Ocean, has an almost surreal quality due to varying degrees of sunglint.

In this image, the presence of currents is highlighted as darker patches or streaks (image left and upper right). In contrast, shallow water in the lagoon presents a more uniform, mirror-like appearance, suggesting that there are no subsurface currents. Wave crests visible around the atoll are likely the result of both surface winds and subsurface currents.

Located between the Mozambique coast of Africa and the island of Madagascar, Bassas da India is part of the French Southern and Antarctic Lands. It is uninhabited because it is completely submerged at high tide; there is no vegetation on the atoll for the same reason. The atoll is approximately 10 kilometers (6 miles) in diameter, and covers an area (including the lagoon) of approximately 80 square kilometers (31 square miles).

Astronaut photograph ISS027-E-9771 was acquired on April 2, 2011, with a Nikon D2Xs digital camera using an 800 mm lens, and is provided by the ISS Crew Earth Observations experiment and Image Science & Analysis Laboratory, Johnson Space Center. The image was taken by the Expedition 27 crew. The image has been cropped and enhanced to improve contrast. Lens artifacts have been removed. The International Space Station Program supports the laboratory as part of the ISS National Lab to help astronauts take pictures of Earth that will be of the greatest value to scientists and the public, and to make those images freely available on the Internet. Additional images taken by astronauts and cosmonauts can be viewed at the NASA/JSC Gateway to Astronaut Photography of Earth. Caption by William L. Stefanov, NASA-JSC.