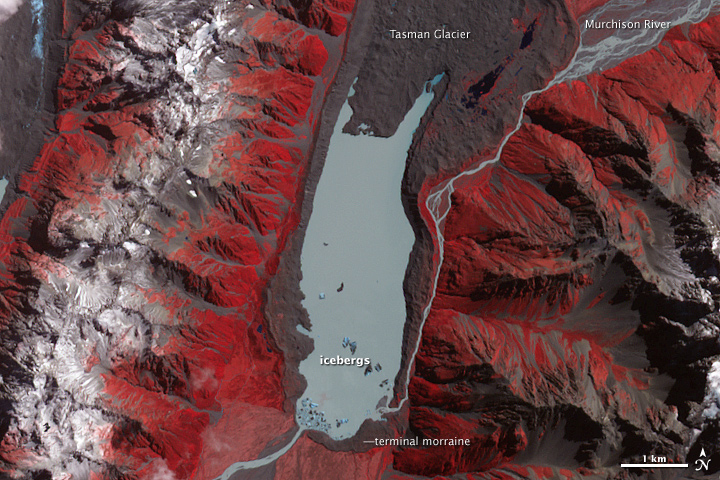 The magnitude 6.3 earthquake that ravaged Christchurch, New Zealand, on February 22, 2011, also broke a 30 million-ton piece of ice off the Tasman Glacier. The ice broke into many smaller icebergs after falling into Tasman Lake. By the time the Advanced Spaceborne Thermal Emission and Reflection Radiometer (ASTER) on NASA’s Terra satellite acquired this image on March 2, the icebergs had congregated at the far end of the lake.

In the false-color image, plant-covered land is red. The dirt-coated glacier is dark brown, matching the exposed rock in the surrounding Southern Alps. White snow tops the mountains to the west, and the river and lake—clouded with finely ground rock—are silver.

Situated about 200 kilometers (120 miles) west of Christchurch, Tasman Glacier is New Zealand’s largest and longest. It has been retreating in recent years, and shedding ice from its foot, or terminus, is one mechanism of retreat. The February 2011 earthquake provided the final pulse of energy to calve off ice that had been about to break off anyway.

By the end of 2007, the New Zealand National Institute of Water and Atmospheric Research (NIWA) reported that the Tasman Glacier had retreated five kilometers (about 3 miles) since 1976. Mounds of rocks—moraines—mark the former extent of the glacier and hem in the lake that has formed at its terminus.

Glaciers through New Zealand’s Southern Alps lost 11 percent of their volume between 1976 and 2007. Since then, the glaciers have either lost ice or held steady, depending on the amount of precipitation that fell during the year. According to NIWA, 90 percent of the ice lost from the 12 largest glaciers (including Tasman) can be traced to iceberg calving from the terminus or downwasting—melting on the surface that thins the glacier.