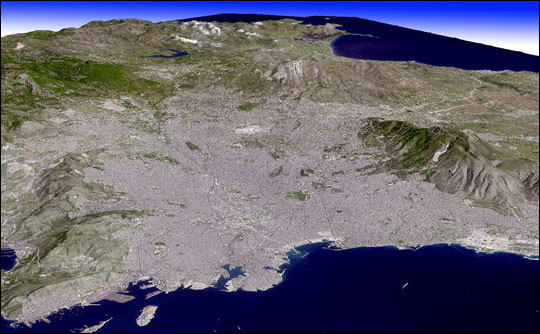 The 2004 Athens Olympics head into their second week this evening, August 20, 2004. For the next nine days, the emphasis shifts from sports like swimming and gymnastics to track & field and the elimination rounds of team sports.

Athens, in southeastern Greece, is the capital and largest city in the country. Situated on the Attic plain, it is surrounded by mountains on three sides, and is served by the port of Piraeus 8 km to the southwest. The Acropolis of Athens has been inhabited since Neolithic times. In the 9th century BC, it was incorporated into the city-state of Athens. Athens reached its golden age in the 5th century BC under Pericles, with a population of perhaps 200,000. In 1997 the International Olympic Committee chose Athens, the site of the first Olympic Games in 1896, as the host of the 2004 Summer Olympics. The country of Greece has invested billions of dollars to improve the city’s infrastructure and construct Olympic venues. This perspective view was made from an image acquired April 29, 2004, draped over a digital elevation model (DEM) created from the same Advanced Spaceborne Thermal Emission and Reflection Radiometer (ASTER) scene.