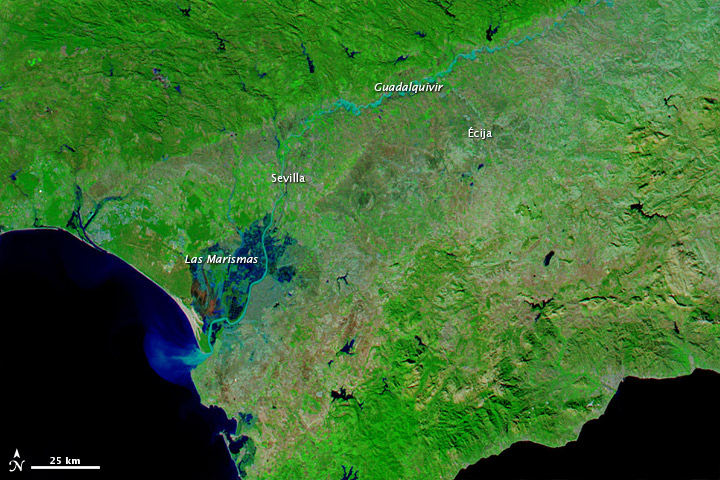 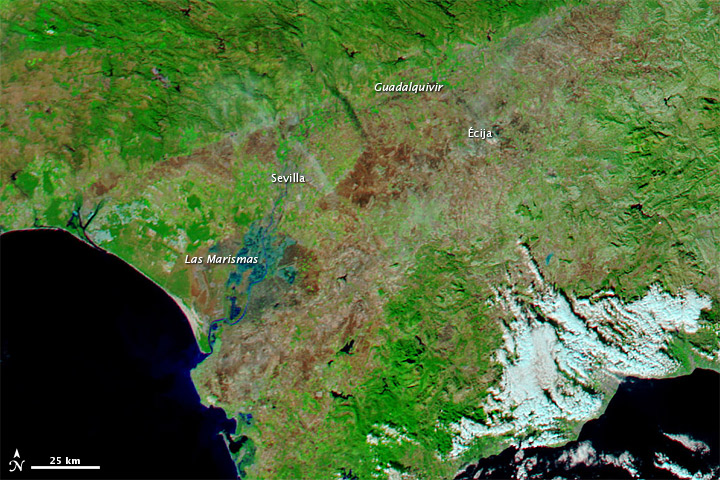 Severe winter weather that coated Great Britain and Ireland with snow also caused flooding in southern Spain in early December 2010. One child was killed when a flash flood overwhelmed the vehicle in which he was riding, according to news reports. Meanwhile, roughly two meters (6 feet) of water submerged parts of the historic center of Écija, forcing authorities to evacuate about 3,000 people.

Acquired by the Moderate Resolution Imaging Spectroradiometer (MODIS) on NASA’s Aqua satellite, these images show Andalucía (Andalusia), including Sevilla (Seville). The top image is from December 9, 2010, and the bottom image is from December 10, 2009, almost exactly a year earlier. Both images use a combination of infrared and visible light to increase the contrast between water and land. Water ranges in color from electric blue to navy. Vegetation appears bright green. Bare land ranges from pink-beige to brick red. Clouds are pale blue-green.

Large swaths of land that are sparsely vegetated in 2009 are covered with vegetation in 2010. (Similar landscape changes, visible in the large images, also occur across the Strait of Gibraltar in Morocco.) The Guadalquivir River, barely visible in 2009, is conspicuous in 2010. Las Marismas, a marshy area near the coast, changes dramatically after the winter storms. A combination of water and dry land in 2009, it is almost completely submerged in 2010. Floods often dump sediment and debris into rivers, and south of Las Marismas, a semicircle of bright blue along the coast suggests that river flow has discharged a heavy sediment load into the ocean in December 2010.

Acquired December 9, 2010, and December 10, 2009, these false-color images show southern Spain before and after flooding in early December 2010.