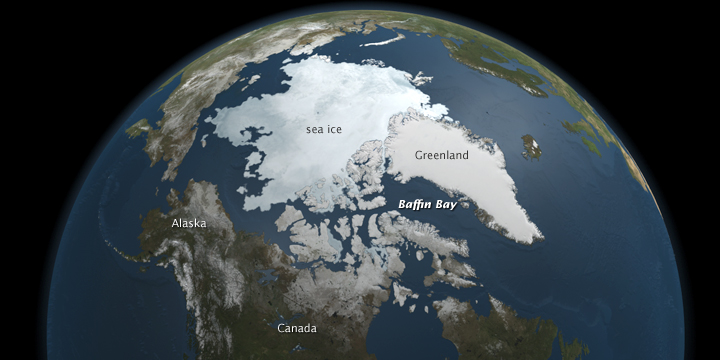 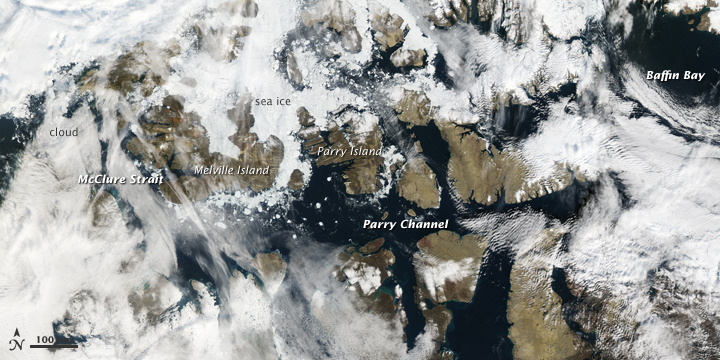 The Arctic Ocean is capped by a dynamic layer of sea ice that grows each winter and shrinks each summer, reaching its yearly minimum extent each fall. NASA's Aqua satellite used microwaves to capture this snapshot of Arctic sea ice on September 3, 2010. The yearly minimum had not yet been reached, but past history says the low point should occur sometime in mid-September.

Everything on Earth’s surface â€“ including humans â€“ emits microwave radiation, though the properties vary with the emitter. The AMSR-E microwave sensor on Aqua relies on those emissions to map the planet. Ice emits more microwave radiation than water, so ice-covered waters appear much brighter than the open ocean to the AMSR-E sensor (see top image). This difference allows the satellite to capture a year-round sea ice record, despite cloud cover and months of polar night.

"The data from AMSR-E and other NASA satellites are critical for understanding the coupling between sea ice and the ocean and atmosphere," said Tom Wagner, manager of NASA's cryosphere program. "It’s important for us to understand these connections to improve our models of how the planet will change."

This year, AMSR-E and other sensors have seen an Arctic Ocean with significantly depleted summer ice, a trend that has been ongoing for at least a decade. According to the National Snow and Ice Data Center, the ice extent for August 2010 was the second lowest in the satellite record for the month (the lowest was 2007). On September 3, ice extent dropped below the seasonal minimum for 2009, becoming the third lowest season in the satellite record.

The Northwest Passage â€“ shown in the lower half of the AMSR-E image and in the bottom MODIS image -- is largely free of ice, allowing the potential for a circumnavigation of the Arctic Ocean. Scientific, natural resources, and shipping interests have been studying the region intently with the expectation that the fabled northern sea may soon become a viable, regular route for sea-going vessels.