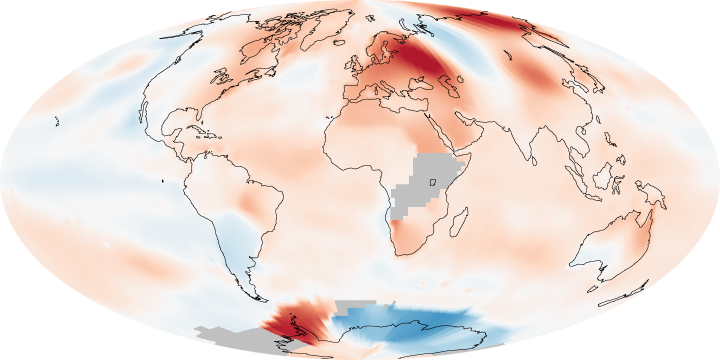 In early August 2010, the NASA Goddard Institute for Space Studies (GISS) released its analysis of global temperatures for the previous month. In July 2010, GISS found, the global average temperature was 0.55 degrees Celsius (almost 1 degree Fahrenheit) warmer than climatology—defined as average temperatures for the same month from 1951 to 1980. July 2010 was practically in a three-way tie for the warmest July on record, tied with July 1998 and July 2005.

The GISS analysis found temperatures more than 5 degrees Celsius (about 10 degrees Fahrenheit) warmer than climatology in the region of Eastern Europe, including Moscow, and in Eastern Asia. (Both Moscow and Eastern Siberia faced severe wildfires and smoke in July 2010.) The eastern United States also experienced unusual heat, although not as severe as the heat in parts of Eurasia.

Substantial areas, however, showed below-normal temperatures, including central Asia and southern South America. Parts of South America suffered through sub-freezing temperatures and heavy snow, leading to hundreds of cold-related deaths, ruined crops and livestock, and contaminated rivers after millions of fish froze, said news reports. Temperatures were below normal across much of East Antarctica, although they were well above normal over the Antarctic Peninsula.

In the GISS analysis, the 12-month running mean temperature reached a record high in the Northern Hemisphere summer of 2010. The GISS release pointed out, however, that the nascent La Niña was moderately strong, would probably strengthen, and would likely affect temperatures throughout the remainder of 2010. (Note the long band of cooler-than-normal water over the Eastern Pacific, immediately off South America, characteristic of La Niña.) Just as a strong El Niño tends to nudge global temperatures upwards, La Niña can have the opposite effect. GISS anticipated that La Niña would cause the 12-month running mean temperature to decline over the rest of the year.

The extreme weather events in Russia and Pakistan have fueled speculation about the role of climate. The GISS release stated, “The location of extreme events in any particular month depends on specific weather patterns, which are unpredictable except on short time scales. The weather patterns next summer will be different than this year. It could be a cooler than average summer in Moscow in 2011.” The GISS release went on to explain, however, that global warming does affect the probability and intensity of extreme events. Climate can drive precipitation because temperature affects the amount of water vapor that air can carry. Likewise, in areas experiencing drought, global warming can increase temperature extremes that exacerbate wildfires.