50th Anniversary of the TIROS Satellite 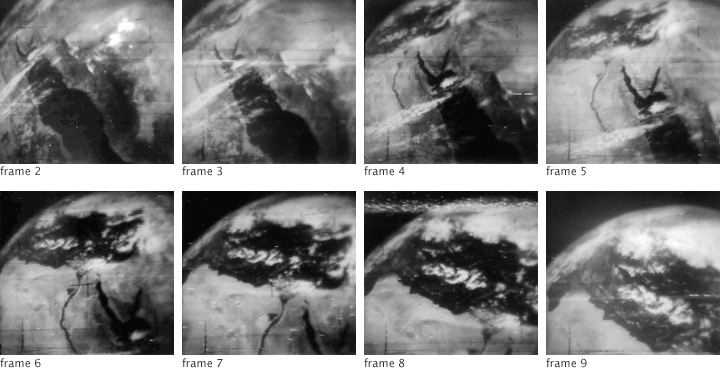 It is almost inconceivable to imagine a weather forecast without a satellite view of clouds sweeping across the globe, but in the spring of 1960, the view from space was a ground-breaking novelty. The first satellite designed to observe clouds was TIROS-1, or the Television InfraRed Observation Satellite, and it launched on April 1, 1960. The satellite carried two tiny television cameras, each weighing about two pounds. One camera captured a wide view of the Earth about 450 miles below, while the other recorded a narrower, more detailed view.

TIROS-1 orbited from pole to pole, snapping photos every 30 seconds, as illustrated in this series of images. The images were stored on tape recorders on the satellite until TIROS-1 came into range of data stations in Fort Monmouth, New Jersey, or Kaena Point, Hawaii. The first of the images, labeled “frame 2,” shows the Red Sea. The water is black, and vegetated land on either side is also dark-colored. The deserts of the Arabian Peninsula on the east and the Sahara Desert of Africa on the west are light gray. The brightest features in the image are clouds.

When TIROS-1 acquired frame 3 thirty seconds later, the satellite had moved northwest. By frame 6, the Nile River has become the focus of the image, though its distinctive triangular delta is partially covered with cloud. In the last frame, the shore of Egypt and Libya runs along the lower portion of the image, while the focus is on clouds over the Mediterranean Sea.

TIROS-1 captured these photos during its 44th of 1,392 orbits made between April 1 and June 18, 1960. During its short three-month lifetime, the satellite took 23,000 images of Earth. The TIROS program provided the first accurate weather forecasts based on data from space, demonstrating that it was possible to use satellites to observe weather. The satellite has a long legacy. TIROS-1 led to nine more TIROS satellites, seven Nimbus-series meteorological research satellites, 14 Geostationary Operational Environmental Satellites, 19 NOAA Polar Orbiting Satellites, and many more meteorological satellites maintained by the Department of Defense and other nations. Together, these weather satellites have provided 50 years of improved weather forecasts.

The first satellite designed to observe clouds was launched on April 1, 1960.