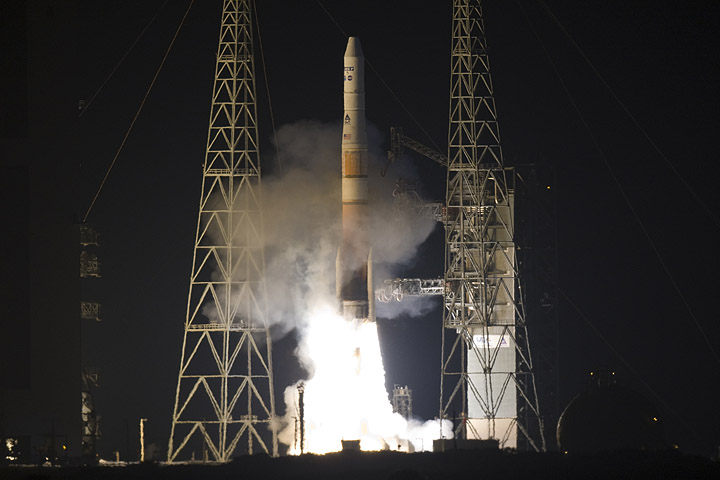 When it launched on the evening of March 4, 2010, the Geostationary Operational Environmental Satellite (GOES)-P was just beginning its journey to orbit 22,300 miles from Earth. In this launch photo, the satellite sits on the end of a powerful United Launch Alliance Delta IV rocket, which lifted off the launch pad at Cape Canaveral, Florida, at 6:57 p.m. Eastern Standard Time. Once the satellite reached its orbit about four hours and 20 minutes after launch, GOES-P became GOES-15, one of the fleet of satellites necessary to predict weather in North America.

The satellites sit in a very special orbit that allows them to circle the Earth once in 24 hours. This orbit (a high Earth or geosynchronous orbit) means that the satellite will always be directly over the same point on Earth, ensuring a continuous view of the ground. The GOES satellites see nearly a full hemisphere of the Earth at one time, tracking weather parameters like clouds and water vapor. The information is the basis for weather forecasts.

GOES-P also carries instruments to monitor space weather, or weather produced by the Sun. The satellite’s X-ray imager will detect solar flares before they reach Earth, making it possible to forecast solar events that would interfere with power grids, airline communication, or other satellites, such as Global Positioning System or communication satellites.