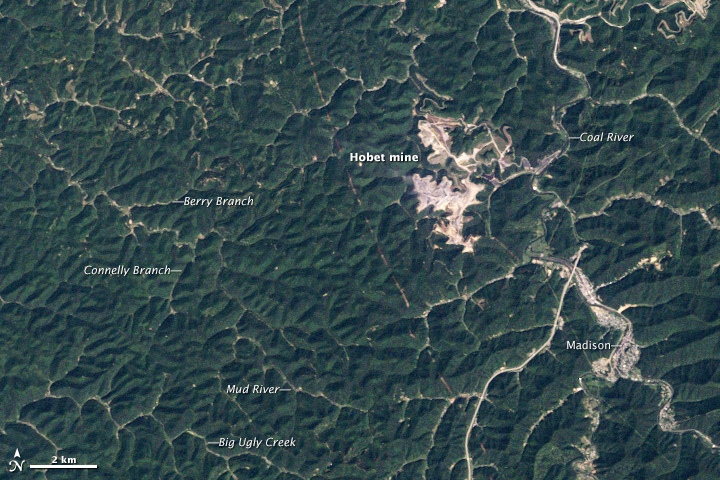 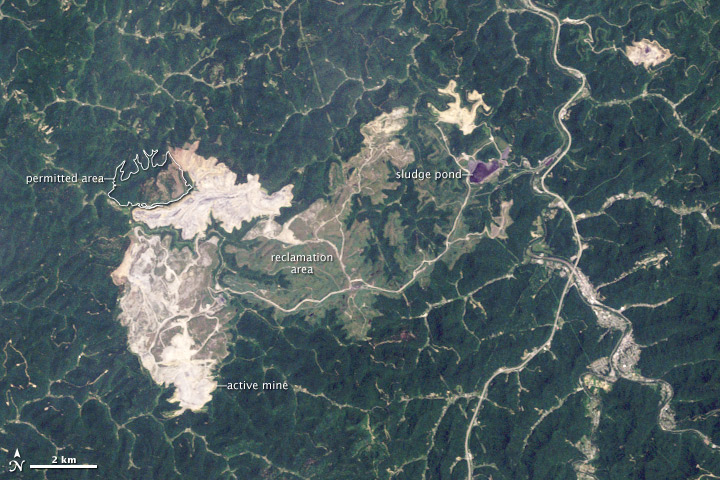 Below the densely forested slopes of southern West Virginia’s Appalachian Mountains is a layer cake of thin coal seams. To uncover this coal profitably, mining companies engineer large—sometimes very large—surface mines. This pair of images shows the growth of one of the largest surface mines in West Virginia during the past 25 years. The images are from the Earth Observatory’s latest World of Change feature, Mountaintop Mining, West Virginia.

Based on data from NASA’s Landsat 5 satellite, these natural-color (photo-like) images document the growth of the Hobet mine in Boone County, West Virginia, as it expands from ridge to ridge between 1984 to 2009. The natural landscape of the area is dark green, forested mountains, creased by streams and indented by hollows. The active mining areas appear off-white, while areas being reclaimed with vegetation appear light green. A pipeline roughly bisects the images from north to south.

In 1984, the mining operation is limited to a relatively small area west of the Coal River. By 2009, it is has expanded across more than 10,000 acres (15.6 square miles) to the south and west. Most of the mine lies within the upper watershed of the Mud River, which flows northwest through the area. Coal companies dispose of mining waste rock by building rock and earth dams called valley fills in hollows, gullies, and streams. The longest valley fill at this mine appears to have been the near-complete filling of Connelly Branch from its source to its mouth at the Mud River.

According to a 1998 report from the U.S. Fish and Wildlife Service, nearly 40 percent of the year-round and seasonal streams in the Mud River watershed upstream of and including Connelly Branch had been filled or approved for filling. Some scientists think that regulation and mitigation strategies for these mines are inadequate, and that regulators should not issue more permits for them until better mitigation and restoration strategies can be developed. In 2009, the Environmental Protection Agency intervened in the approval of a permit to further expand the Hobet mine into the Berry Branch area (white outline) and worked with mine operators to minimize the disturbance and to reduce the number and size of valley fills.

NASA images by Robert Simmon, based on Landsat 5 data from the USGS Global Visualization Viewer. Caption by Rebecca Lindsey.