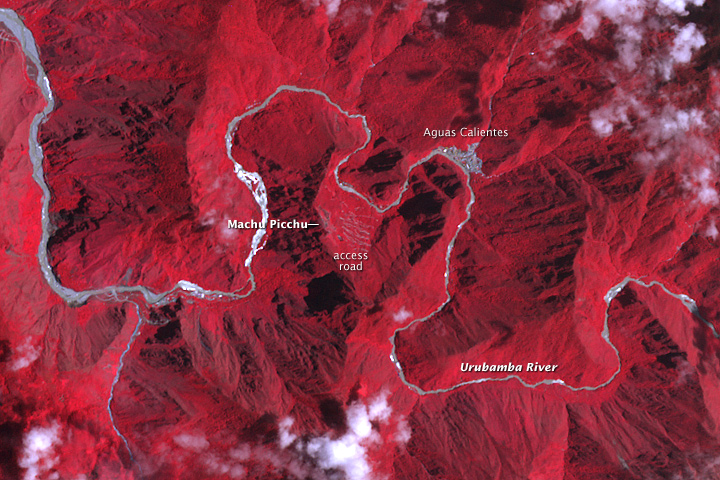 Heavy rains in Peru wrought havoc on transportation in the steep mountain terrain around Machu Picchu. Mudslides and flood waters took out train tracks and bridges across the Urubamba River (also known as the Vilcanota River in this region), cutting off rail access to the town of Aquas Calienates. Some 4,000 tourists were trapped in the town for two days until the first helicopters reached the area and began evacuations.

This false-image of Machu Picchu and the area around the site uses a combination of visible and infrared light. The image was captured by the Advanced Spaceborne Thermal Emission and Reflection Radiometer (ASTER) instrument on NASA’s Terra spacecraft on February 1, 2010. Vegetation appears bright red, clouds appear white, and rivers appear blue-gray and white. The steep terrain of this part of the Andes Mountains shows up clearly where tall summits cast long dark shadows. A squiggly line along the side of the mountain shows where a paved footpath winds up to the Incan ruins.

Located at 2,430 meters above sea level (nearly 8,000 feet), Machu Picchu is difficult to reach because it is surrounded by many high ridges and steep-sided valleys. The ancient citadel is a UNESCO World Heritage site, and tourism is essentially the only source of income in the area. While the site was not damaged, officials predicted it would be cut off for weeks if not months as the damage to surrounding roads and trails was assessed and repaired. As many as 20 people may have died in the flooding, while 2,000 homes were ruined.

Acquired February 1, 2010, this false-color image shows the Andes Mountains in the wake of flooding in the region. Vegetation appears bright red, clouds appear white, and rivers appear blue-gray and white.

Heavy rains have overwhelmed the usually arid landscape and led to flooded homes, businesses, and infrastructure.