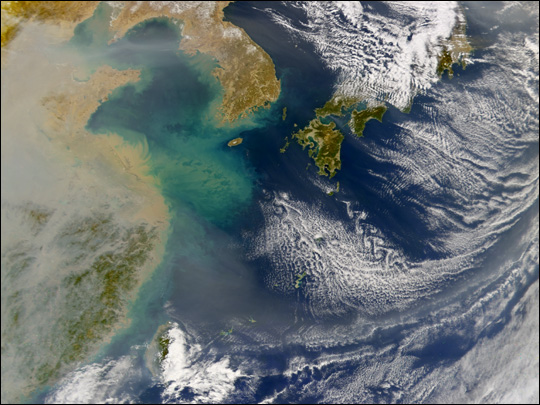 Across eastern China, the increased use of coal and wood for heating in the winter often leads to widespread haze, as evidenced by the vast gray pall of pollution hanging over much of the country on February 15, 2004. Some of the pollution can be seen blowing over and just north of Taiwan, and eastward far out to sea over the Pacific Ocean in this true-color image acquired by the Sea-viewing Wide Field-of-view Sensor (SeaWiFS). (NASA’s Terra satellite also acquired an image over this same region on Feb. 9, 2004.)

In addition to pushing the pollution eastward over the Pacific, the strong winds blowing over eastern China have several other effects evident in this scene. Note the patterns of light brown and turquoise hues in the East China Sea, caused by suspended sediments which are being churned up in the water column by the strong winds. These sediments are being washed out of the mouth of the Yangtze River and Hangzhou Bay in such abundance that they color the water a deep caramel along a long stretch of coastline, making it almost indistinguishable from land in some areas.

Note also the cloud vortex streets extending southward from Korea and Japan, as well as the brownish dust and haze streaming eastward over the Pacific to the north and east of Tokyo.