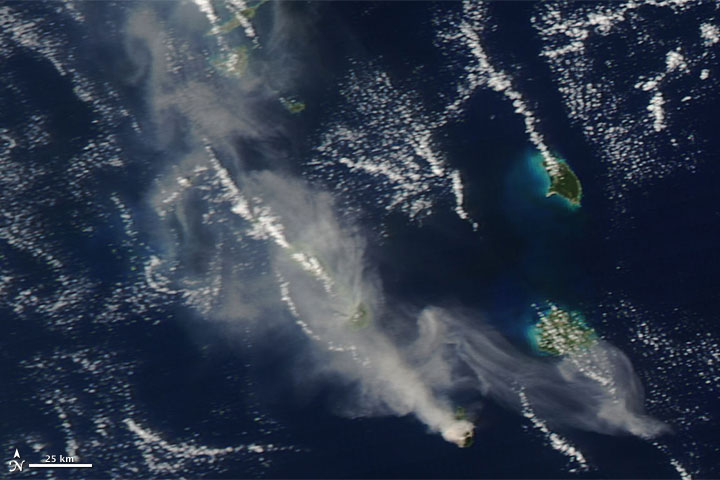 Soufriere Hills continued releasing plumes in late December 2009. The Moderate Resolution Imaging Spectroradiometer (MODIS) on NASA’s Aqua satellite captured this true-color image on December 20, 2009. In this image, most of the ash blows toward the northwest, but a small part of the plume has blown east of the island of Montserrat. The plume’s beige color suggests a combination of ash and steam.

On December 21, 2009, the Volcanism Blog reported heavy ashfall in parts of Montserrat Island, including inhabited areas. Unlike the soft ash from burned vegetation, volcanic ash is a hard, corrosive material that can damage vegetation, paint, and machinery, and it is mildly conductive when wet. Breathing volcanic ash can cause respiratory system damage.

Soufriere Hills is a stratovolcano composed of alternating layers of volcanic ash, lava, and rocks released by earlier eruptions. The volcano reaches a height of 3,002 feet (915 meters), and it fills the southern half of Montserrat. Observers noted a seventeenth-century eruption at Soufriere Hills, after which the volcano remained quiet until 1995.

Acquired December 20, 2009, this true-color image shows a plume from Soufriere Hills Volcano on Montserrat blowing toward the northwest.

Acquired December 21, 2009, this true-color image shows a thick plume blowing toward the southeast from the summit of Soufriere Hills Volcano on the island of Montserrat.