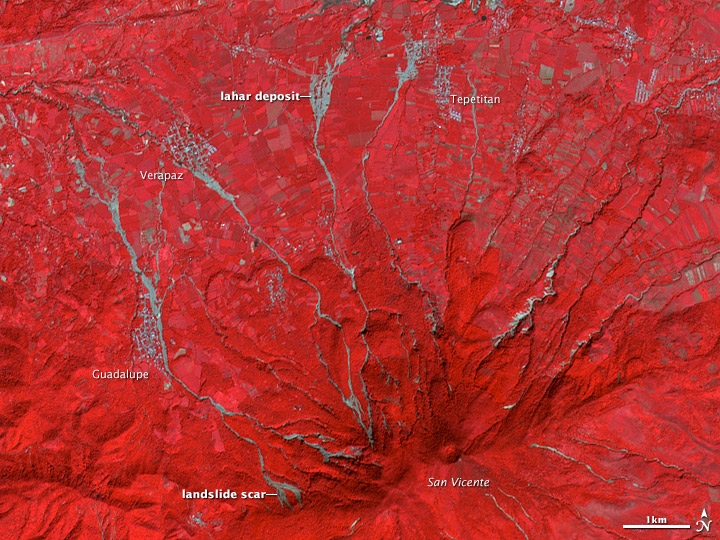 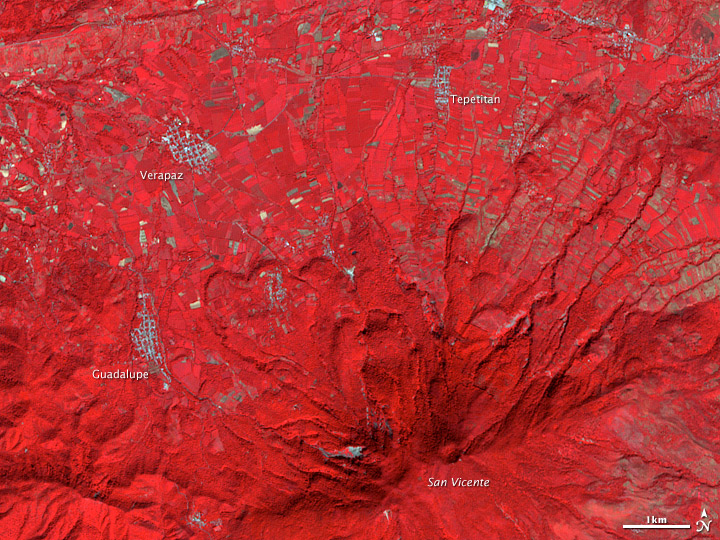 Although El Salvador’s Volcán San Vicente has not erupted in the past 1,700 years, the mountain is still a hazard. In November 2009, dozens of people living near the volcano, also known as Chichontepec, lost their lives after torrential rains saturated the steep hillsides and unleashed numerous landslides. The landslides triggered lahars—avalanches of mud, boulders, and uprooted trees—that poured down ravines and engulfed small agricultural towns located to the north and northwest of the volcano.

This pair of false-color images from the Advanced Spaceborne Thermal Emission and Reflection Radiometer (ASTER) on NASA’s Terra shows the volcano before (bottom) and after (top) the devastating event. The images combine visible and infrared wavelengths of light to make vegetation (red) stand out more clearly from bare ground (bluish gray).

The paths of more than a dozen lahars radiate down the flanks of the volcano in all directions, but the largest and longest flows appear to have occurred on the west and north flanks. A lahar that coursed down the western slopes of the volcano clipped the eastern edge of the small town of Guadalupe, but its northern neighbor, Verapaz, was not as fortunate. A lahar appears to have headed directly into town. At least 16 people were killed and nearly 50 were missing according to news reports from November 9. Across El Salvador, more than 130 people were killed by landslides or flooding during the event.

NASA Earth Observatory image by Robert Simmon, based on data from the NASA/GSFC/METI/ERSDAC/JAROS, and U.S./Japan ASTER Science Team. Caption by Rebecca Lindsey.

The paths of more than a dozen lahars radiate down the flanks of El Salvador’s Volcáan San Vicente in all directions following torrential rains in November 2009.