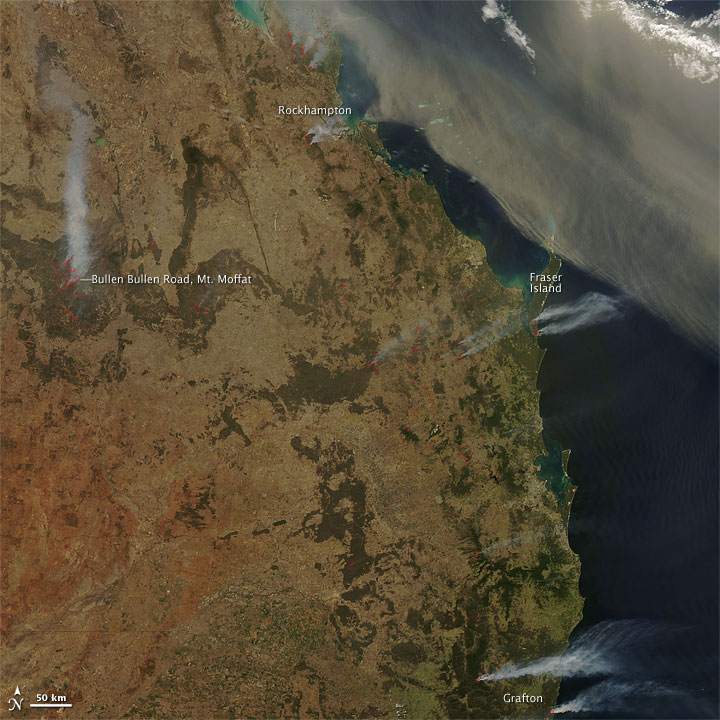 Multiple fires were still burning in Queensland, Australia, on September 27, 2009, as the Moderate Resolution Imaging Spectroradiometer (MODIS) on NASA’s Aqua satellite passed overhead. This true-color image shows smoke billowing away from the fires and blowing toward the north, northeast, or east. Red outlines indicate hotspots associated with the fires.

In this image, a large cluster of fires continues to burn near Bullen Bullen Road, Mt. Moffat. The smoke from that fire complex blows toward the north. East of that fire complex, numerous smaller fires burn near the coast, from north of Rockhampton to south of Grafton. Different wind directions apparently prevail along the coast as those fires send smoke primarily toward the east-northeast. A large swath of airborne dust sweeps across the upper right quadrant of the image.

On September 28, 2009, the Queensland Fire and Rescue Service issued a report stating that the Bullen Bullen Road Fire continued to burn, as did many other grass fires throughout Queensland.

Fires burned throughout Queensland, Australia in late September 2009. Fires burned along the coast, and a large complex of fires burned near Tambo, Queensland.