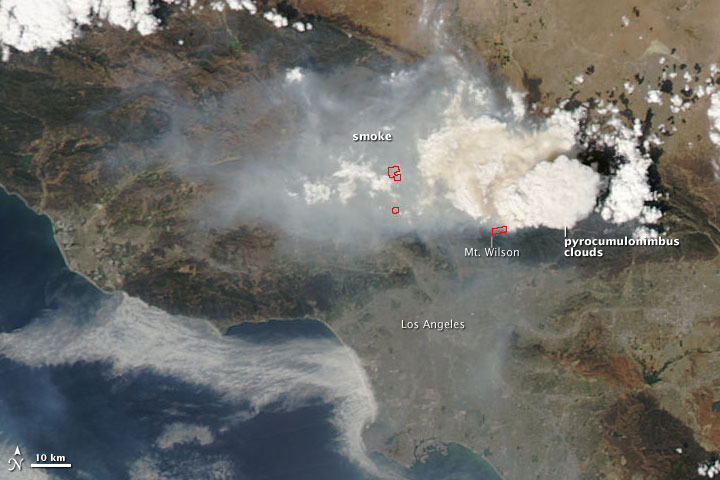 A combination of smoke and clouds hovered over Los Angeles County on the afternoon of September 2, 2009, as remnants of the Station Fire continued to burn. The Moderate Resolution Imaging Spectroradiometer (MODIS) on NASA’s Aqua satellite captured this true-color image around 1:55 p.m. local time (20:55 UTC) on September 2, 2009.

Dingy gray smoke lingers in the west and south. (The large image shows smoke spread over the Pacific Ocean.) The puffy white clouds, which resemble cauliflower heads, are part of a pyrocumulonimbus storm resulting from a heat source. The tall cloud formation, which casts its shadow to the north, has an uneven surface. The western end of the cloud formation has an overshooting top that casts its own small shadow onto the clouds below. The presence of this storm suggests an intense heat energy release from the fire.

As of September 3, the historic observatory and TV and radio transmission lines at Mt. Wilson had escaped the flames, but the fire had exacted a tremendous toll on the community. As of the evening of September 2, the Station Fire had cost more than $27 million to fight, according to the Los Angeles Times. According to the September 3 report from California’s Department of Forestry and Fire Protection, the fire had burned 144,743 acres (586 square kilometers), and had damaged or destroyed more than 70 homes, three commercial properties, and more than 30 outbuildings or other structures. Hundreds of commercial properties and thousands of homes remained under threat, but the fire was 38 percent contained.