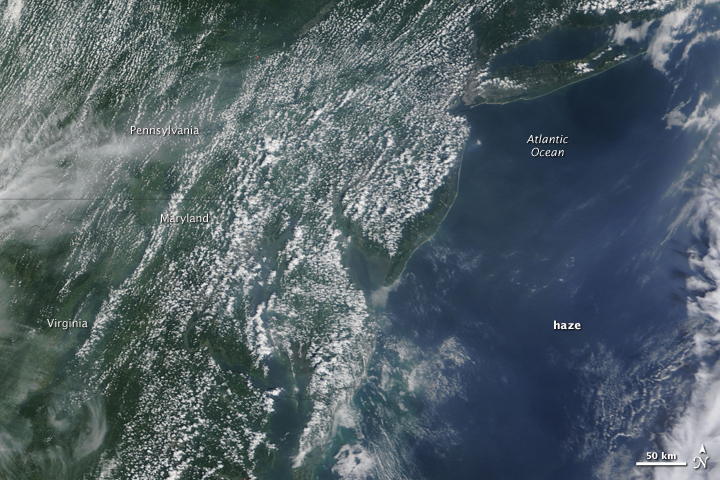 If a single word could describe this image, that word might be “summertime.” Haze rolls off the Eastern seaboard over the Atlantic Ocean, while clouds pile up along the ridgelines of the Appalachian Mountains. According to the Environmental Protection Agency, air quality in the region was good to moderate on August 4, 2009, when this image was acquired. The Moderate Resolution Imaging Spectroradiometer (MODIS) on NASA’s Terra satellite captured this view on the edge of its field of view. Since the sensor was looking at an angle rather than straight down, it captured a thicker slice of the atmosphere, amplifying the appearance of haze.

Such scenes are common fare in the summer. Ground-level ozone, a major component of most summer haze, forms when summer heat and intense sunlight react with common pollutants from cars, power plants, and other industrial sources. The same heat that leads to ozone formation also pushes air masses up into the atmosphere where clouds form and often develop into localized thunderstorms. In this image, the clouds are aligned vertically, echoing the shape of the Appalachian Mountains. The mountains provide extra lift, allowing air to move higher into the atmosphere where the water vapor cools and condenses into clouds.

Haze rolls off the Eastern seaboard over the Atlantic Ocean, while clouds pile up along the ridgelines of the Appalachian Mountains in this photo-like image from August 4, 2009.