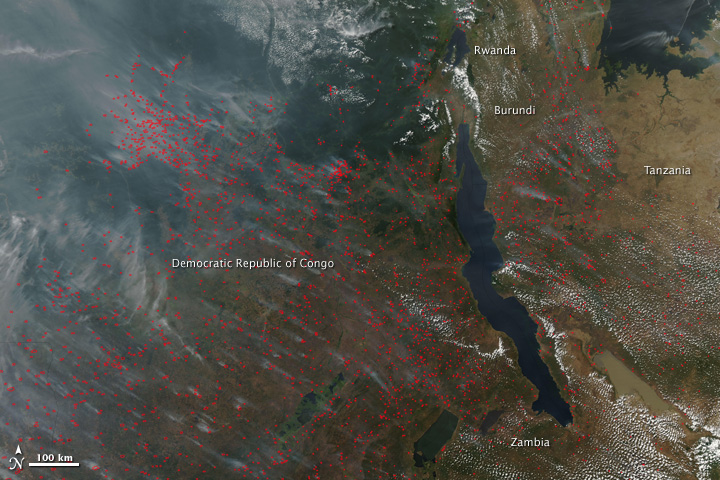 People in Africa have used fire for hundreds, possibly thousands, of years as an agricultural and land management tool. In the dry season, they set fires to clear brush and dead vegetation from farm and grazing land and to deal with household trash. As the rainy season migrates north and south across the continent each year, a wave of widespread fires precedes its arrival.

This image from the Moderate Resolution Imaging Spectroradiometer (MODIS) on NASA’s Aqua satellite from July 8, 2009, shows thick smoke from hundreds of fires (locations marked in red) burning in central Africa, from Democratic Republic of Congo (DRC) in the western part of the scene to Tanzania in the east. The tan and dull green landscape of southern DRC, Zambia, and Tanzania is savanna or grassland, while the deep green landscape of interior DRC (upper left) is tropical forest.

Many of the fires have only small smoke plumes, and some appear to be making no smoke. The amount of smoke a fire generates is influenced by many factors, including the amount (biomass) of vegetation that is burning and how wet it is. Dry grass and brush would generate less smoke than trees. The large amount of smoke coming from the fires in DRC at upper left may be a sign that forest is burning.

This image from the Moderate Resolution Imaging Spectroradiometer (MODIS) on NASA’s Aqua satellite from July 8, 2009, shows thick smoke from hundreds of fires burning in central Africa.

As the rainy season migrates north and south across Africa each year, a wave of widespread fires precedes its arrival. Fires were widespread across central Africa in early July 2009.