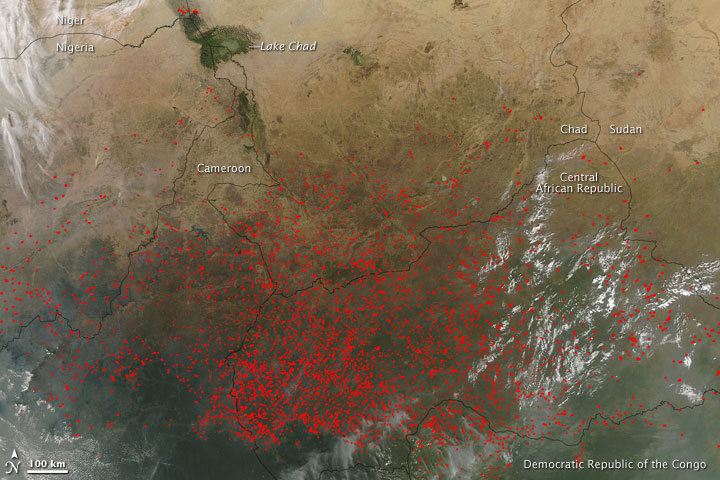 In late December 2008, fires burned throughout central Africa. The Moderate Resolution Imaging Spectroradiometer (MODIS) on NASA’s Aqua satellite captured this image on December 29, 2008. In this image, the red dots indicate hotspots—thermal anomalies associated with wildfires or agricultural fires. In some areas, especially the southwestern Central African Republic, the hotspots are so numerous they almost converge to form a mass of red. Fires also appear in the west, in Nigeria and Cameroon, and in the north, in Chad. Multiple fires also burn along the northern perimeter of Lake Chad.

Residents may set fires to facilitate hunting (by driving game) or to clear land for pasture or agriculture. On a small scale, fires do not necessarily have a serious environmental consequences, but multiple fires can affect air quality and even climate.

Haze appears around the fringes of this image. Besides smoke from the fires, some of the haze may result from dust blown from the Bodele Depression northeast of Lake Chad.

Fires burned from Nigeria through the Central African Republic in late December 2008.

Fires in Central and Western Africa

Fires burned throughout central and western Africa at the end of 2008.

Agricultural fires burned from Senegal to Ghana at the end of 2008.