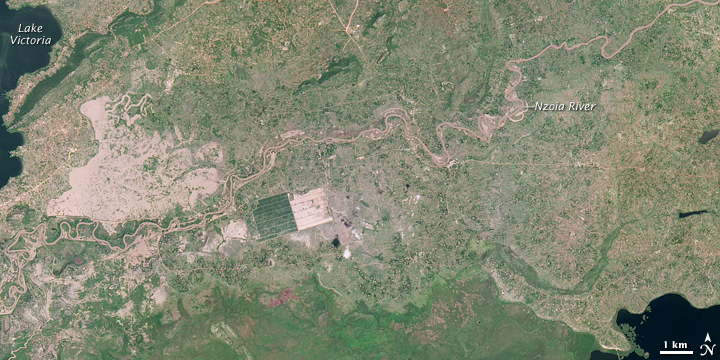 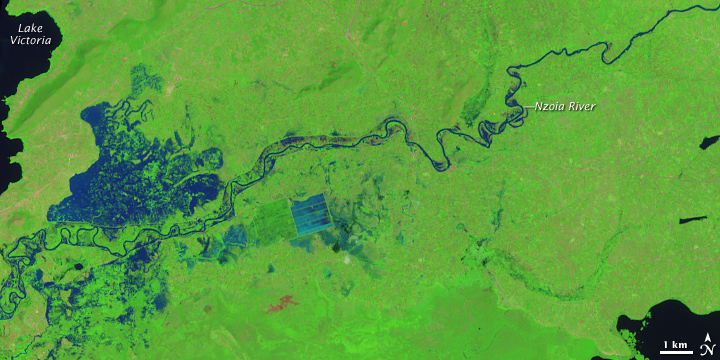 Like many rivers across the world, the Nzoia River in western Kenya pushes over its banks annually. Dykes usually contain the river, but in November 2008, the river burst through the dykes to flood the low-lying land around it. At least 5,000 people were marooned or evacuated from the banks of the swollen river, said the United Nations Office for the Coordination of Humanitarian Affairs on November 14. These images, captured by the Advanced Land Imager (ALI) on NASA’s Earth Observing-1 satellite, show the floods on November 13, 2008.

The top image is a photo-like view of the river and its surroundings. The river, brown with runoff, snakes west across the image, emptying into Lake Victoria on the left. The silty soil left behind from past floods and easy access to fresh water make this a fertile agricultural region. Green and tan fields line the river. Muddy brown flood water spreads across the land north of the river, but it is difficult to know what is mud or bare ground, and what is water.

To differentiate between silt-laden water and earth, scientists use infrared light (short-wave infrared), which water absorbs and plants and bare earth tend to reflect. For this reason, water is black in the lower, infrared-enhanced image. Sediment in the water reflects infrared light, giving the water a blue tint. The surrounding plant-covered land is bright green, and bare earth is pale pink-tan. Because water and land are so different in this type of image, it is useful for flood mapping.

On November 21, 2008, NASA, the United States Agency for International Development (USAID), and other partners launched a service to make satellite images such as these available to African nations to help manage natural disasters, disease outbreaks, biodiversity, and climate change. The service, called SERVIR Africa, is modeled on a similar service that has been successfully operating in Central America since 2005. One objective of the program is to use satellite data to predict areas at risk of severe flooding, such as the densely populated Nzoia basin. Satellite flood maps in the past have helped governments and aid agencies assess the severity of the flooding and plan a response.