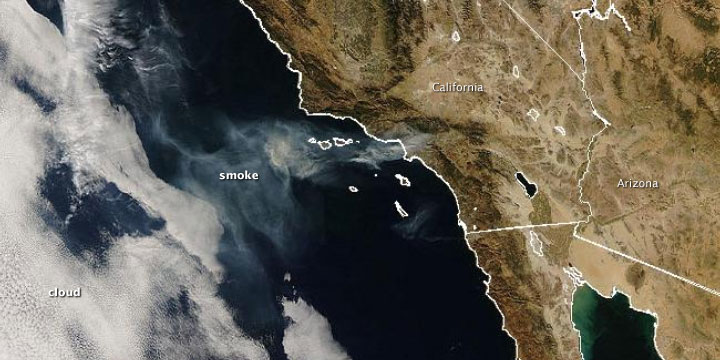 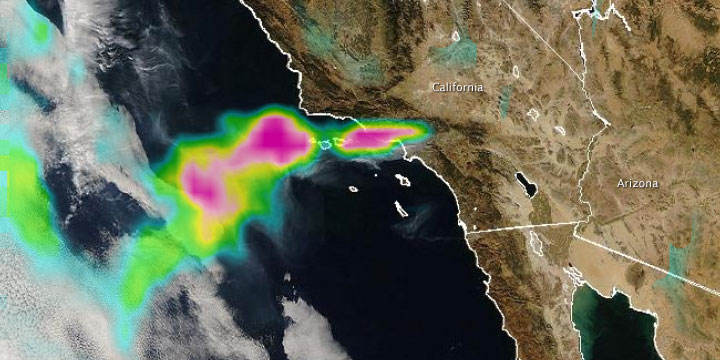 Smoke from the recent outbreak of fires in Southern California can clearly be seen from NASA satellites. The top, photo-like image was taken by the Moderate Resolution Imaging Spectroradiometer (MODIS) on NASA’s Aqua satellite on November 16, 2008, and it shows the smoke drifting to the southwest from the Los Angeles basin over the waters of the Pacific Ocean. The lower image shows measurements of aerosols—tiny particles within smoke—as observed by the Ozone Monitoring Instrument (OMI) onboard NASA’s Aura satellite, overlaid on top of the MODIS image.

In the lower image, aerosol concentrations are represented by an aerosol index, with the highest concentrations in pink, and the lowest in dark blue. The aerosol index is calculated based on the way the tiny particles absorb and scatter light. Specifically, the index is a measurement of the difference between the amount of ultraviolet light the smoke-filled atmosphere scatters back to the satellite compared to the amount of ultraviolet light that the atmosphere would scatter back if it were totally clear. The difference between these two measurements can effectively detect smoke that would otherwise be invisible in photo-like imagery.

In the MODIS image, the smoke disappears when it moves over the bright surface of the low-level marine stratocumulus clouds. The OMI aerosol index measurement reveals, however, that smoke is present over the clouds. Such ultraviolet measurements from instruments like OMI are useful to scientists working to understand how aerosols affect clouds.