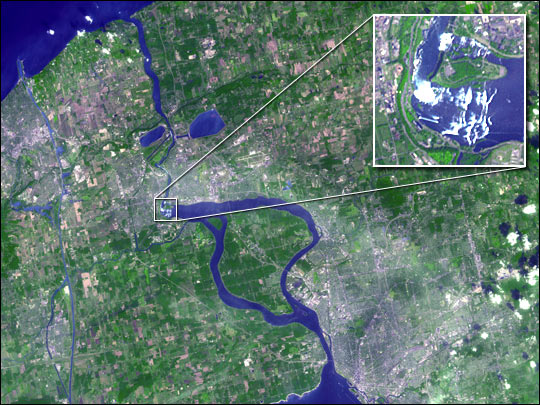 The Niagara River (a Native American word for “at the neck”), linking Lake Erie and Lake Ontario, flows around Goat Island, and then plummets over Horseshoe and American Falls, better known as Niagara Falls. The port city of Buffalo, New York is located at the northeast corner of Lake Erie where the river first leaves the lake. The image also includes the infamous Love Canal. In the late 1970s and early 1980s, as a result of chemical wastes having been dumped in the area of the Love Canal from 1947 to 1952, the area was evacuated. In 1990, after a 12-year cleanup effort, the federal government declared parts of the area habitable and reopened those areas.

This image was acquired on September 8, 2001 by the Advanced Spaceborne Thermal Emission and Reflection Radiometer (ASTER) on NASA’s Terra satellite. With its 14 spectral bands from the visible to the thermal infrared wavelength region, and its high spatial resolution of 15 to 90 meters (about 50 to 300 feet), ASTER images Earth to map and monitor the changing surface of our planet.

The Niagara River forms the U.S.-Canadian Border and allows Lake Erie to drain northwest into Lake Ontario. Lake Ontario is about 100 m lower than Lake Erie; the Falls and the rapids account for most of the elevation difference. The energy derived from water falling over the falls, with average total flows of 750,000 U.S. gallons (2.8 million liters) per second, fuel multiple power plants on the river. Power Plants downstream from the plant generate 4.4 million kilowatts of power for both Ontario and New York.