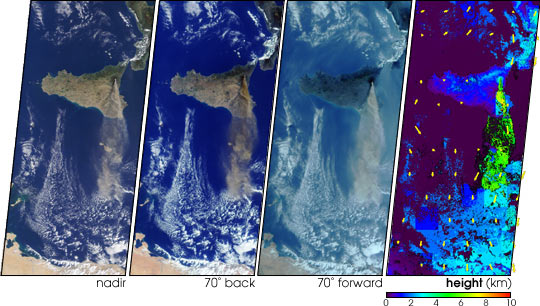 The height and southward extent of the ash plume emanating from Sicily’s Mount Etna volcano on October 27 are captured in these four image panels from the Multi-angle Imaging SpectroRadiometer (MISR). Mount Etna, Europe’s most active volcano, was revived when a series of intermittent minor earthquakes shook the eastern edge of Sicily and parts of mainland Italy during September and October. The eruption of Etna sent a thick blanket of volcanic ash over much of eastern Sicily, sparked forest fires, and destroyed or damaged hundreds of buildings with lava flows and pyroclastic activities. October 27, 2002, marks the start of the second period of intense activity from Etna in little over a year. The previous period of activity occurred during July and August 2001, during which time MISR also observed extensive ash plumes emanating from the volcano.

The three natural-color (red, green and blue) images depict the scene as observed by MISR’s downward-looking (nadir) camera and most oblique (70-degree) backward and forward-viewing cameras. Both images from the oblique cameras enhance the appearance of the ash plume, which extends southward about 400 kilometers toward Libya.

The right-hand panel provides a stereoscopically retrieved height field of the clouds and ash plume. Clouds are generally situated between 2 and 4 kilometers above the surface, and Etna’s ash plume extends skyward to altitudes of 5 to 6 kilometers. Retrieved cloud-tracked wind vectors are indicated by yellow arrows superimposed over the height field. The vectors point in the direction of motion and their lengths are proportional to speed. The longest vector corresponds to a wind speed of about 7 meters per second. (In this display, the vectors have not been classified by height, and may represent winds associated with clouds at different altitudes.) Heights and motion vectors are derived from automated matching of spatial features among different viewing angles, and accurate camera-to-camera geometric registration is important for this process to achieve accurate results. Since the land surface is static, the low speeds obtained over clear land indicate that the retrievals are working properly. When the stereoscopic retrieval determines that a location is at a near-surface altitude, or if there is insufficient spatial contrast but MISR’s nadir-camera radiometric cloud mask indicates clear sky, digital surface elevation data are displayed instead. Some parts of the ash plume exhibit insufficient spatial contrast for stereoscopic retrieval but were classified as cloudy by the radiometric cloud mask; these areas are shown in dark gray.

The Multi-angle Imaging SpectroRadiometer observes the daylit Earth continuously from pole to pole, and every 9 days views the entire globe between 82 degrees north and 82 degrees south latitude. The MISR Browse Image Viewer provides access to low-resolution true-color versions of these images. These data products were generated from a portion of the imagery acquired during Terra orbit 15204. The panels cover an area of 380 kilometers x 845 kilometers, and utilize data from blocks 59 to 64 within World Reference System-2 path 189.