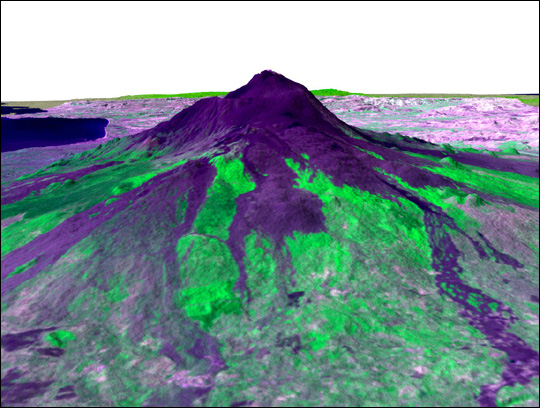 Italy’s Mount Etna is the focus of this 3-D perspective view made from data collected by the Advanced Spaceborne Thermal and Emission Radiometer (ASTER), flying aboard NASA’s Terra spacecraft, and overlaid on Shuttle Radar Topography Mission (SRTM) topography. The image is looking south with dark lava flows from the 1600s (center) to 1981 (long flow at lower right) visible in the foreground and the summit of Etna above. The city of Catania is barely visible behind Etna on the bay at the upper left. In late October 2002, Etna erupted again, sending lava flows down the south and east sides of the volcano, out of sight in this view.

In addition to the terrestrial applications of these data for understanding active volcanoes and hazards associated with them such as lava flows and explosive eruptions, geologists studying Mars find these data useful as an analog to martian landforms and geologic processes. In late September 2002, a field conference with the theme of Terrestrial Analogs to Mars focused on Mount Etna, allowing Mars geologists to see in person the types of features they can only sample remotely.

Elevation data used in this image was acquired by SRTM aboard the Space Shuttle Endeavour, launched on Feb. 11, 2000. SRTM used the same radar instrument that comprised the Spaceborne Imaging Radar-C/X-Band Synthetic Aperture Radar (SIR-C/X-SAR) that flew twice on the Space Shuttle Endeavour in 1994. SRTM was designed to collect 3-D measurements of the Earth's surface. To collect the 3-D data, engineers added a 60-meter (approximately 200-foot) mast, installed additional C-band and X-band antennas, and improved tracking and navigation devices. The mission is a cooperative project between NASA, the National Imagery and Mapping Agency (NIMA) of the U.S. Department of Defense and the German and Italian space agencies. It is managed by NASA’s Jet Propulsion Laboratory, Pasadena, Calif., for NASA’s Earth Science Enterprise, Washington, D.C.