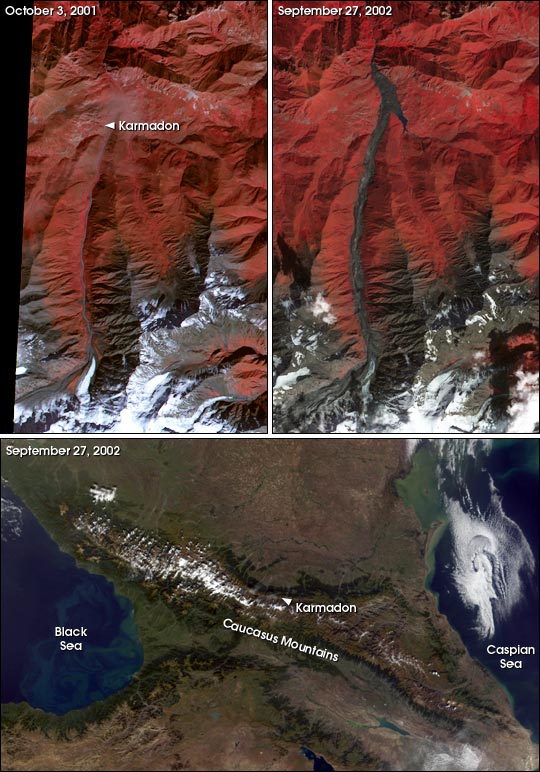 This pair of false-color images (top) from the Advanced Spaceborne Thermal Emission and Reflection Radiometer (ASTER), flying aboard NASA’s Terra satellite, shows Mt. Kazbek in Southern Russia before and after the recent collapse of the Kolka Glacier. On September 20, a collapse of a hanging glacier from the slope of Mt. Dzhimarai-Khokh onto the Kolka Glacier triggered an avalanche of ice and debris that went over the Maili Glacier terminus then slid more than 15 miles (24 km). The avalanche buried small villages in the Russian Republic of North Ossetia, killing dozens of people.

The top left scene was acquired on October 3, 2001, and the top right scene was acquired on September 27, 2002. The long, dark grey streak running upward through the center of the scene shows the gorge that was overrun by ice and debris from the avalanche. The deep reds show vegetated land surfaces, grey areas are bare rock, and white shows ice-covered lands.

The bottom image was also acquired on September 27, 2002, by the Terra MODIS sensor. This scene shows the location of the landslide relative to distinguishing features in the larger region. Click to read more about the Kolka Glacier collapse and see an astronaut photo of the region.

Images by Robert Simmon and Jesse Allen, based on data from the NASA/GSFC/MITI/ERSDAC/JAROS, and U.S./Japan ASTER Science Team and the MODIS Science Team

In September 2002, the collapse of a hanging glacier from Mt. Dzhimarai-Khokh triggered an avalanche that buried small villages in North Ossetia.

Image of the Day Land Life Volcanoes Snow and Ice

On Sept. 20, 2002, part of the Kolka Glacier on Mt. Kazbek collapsed, triggering a massive avalanche through the Karmadon Gorge in North Ossetia, Russia. This comparison pair of ASTER images shows the extent of the area affected by the landslide.

This photograph of Mt. Kazbek was taken from the International Space Station on August 13, 2002. The astronauts and cosmonauts took the photograph at the request of the Russian URAGAN Project, which is studying changes in the world’s glaciers in response to global climate change. Although scientists have predicted the possibility of large glacial collapses as the climate warms, no one predicted that tragedy would strike the mountain village of Karmadon, a little more than a month later.