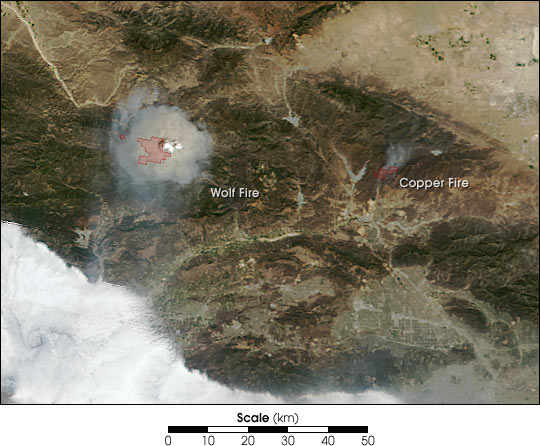 In Southern California, north of Los Angeles, two large fires have been raging in area national forests. The westernmost fire in this image is the Wolf Fire, which started on June 1, 2002. According to reports from the U.S. Forest Service, the fire made a ?major run? on Thursday, June 6, and added 8,000 acres to its size, bringing the total to almost 20,000 acres. In this image clouds are visible on top of the smoke plume, a characteristic of the most intense wildfires. To the east, the Copper Fire, which broke out in the town of Saugus, just southeast of the city of Santa Clarita, started on June 5, and within two days had grown to 7,000 acres, destroying 20 structures, including 7 residences. Several small towns in the area are threatened by the blaze. In the large image, brownish smoke from the two fires can be seen above a bank of clouds along the coast. This image was acquired by the Moderate Resolution Imaging Spectroradiometer (MODIS) on the Terra satellite on June 6, 2002.