Tucson, Arizona, and its Surroundings 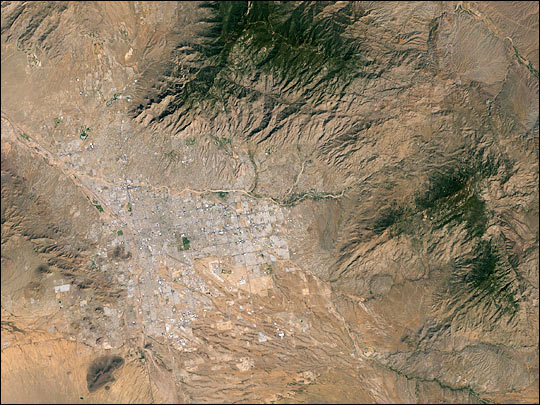 Tucson, Arizona, lies sprawled beneath the Santa Cataline mountains to the north and the Rincon mountains to the east. The dark green forests that cap each of these ranges stand out against the light brown color of the sonoran desert and urban areas. Most of eastern Arizona is classified as sonoran desert, a biome characterized by the saguaro cactus. At higher elevations, though, cooler temperatures and more increased rainfall allow different plants and animals to live surrounded by desert. These “life zones” vary with elevation in a similar manner to the changes in vegetation and climate that occur from Mexico to Canada. Sonoran desert is divided into upper and lower zones, with lower sonoran dominated by mesquite, creosote, and cacti, and upper sonoran supporting sagebrush, juniper, and oak. Above this is the transition zone, characterized by open ponderosa pine forest. At the summit of these ranges are the douglas fir and spruce forests of the canadian zone.

This true-color image was acquired the Enahnced Thematic Mapper plus (ETM+) aboard the Landsat-7 satellite on October 24, 2001.

Image by Robert Simmon, based on data provided by the Landsat 7 science team.