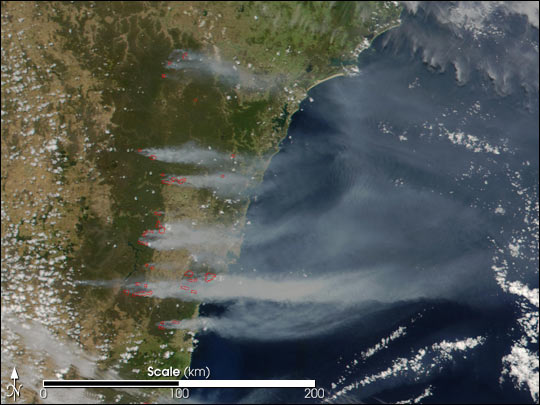 Raging brush fires are threatening the suburbs of Sydney, Australia, in the waning days of 2001. Lightning strikes started some of the fires in mid-December, but arsonists may have started more. So far the flames have damaged Blue Mountain and Royal National Parks, threatening the wildlife there. More than 100 homes in suburban Sydney have also been destroyed.

The image above shows the fires on December 25, 2001, when smoke and haze covered the city of Sydney. The scene was acquired by the Moderate-resolution Imaging Spectroradiometer (MODIS) aboard NASA’s Terra satellite.

Although bush fires are common in Australia during the summer months, this outbreak is particularly severe.

A large number of wildfires continue to burn in southeastern Australia. News reports indicate that the danger to residents of Sydney has subsided somewhat.