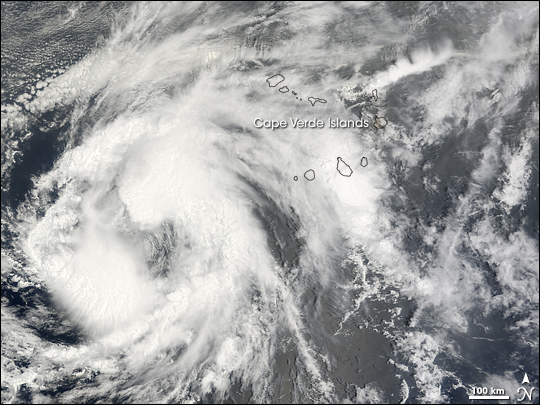 The outer bands of Tropical Storm Josephine cover the Cape Verde Islands off the west coast of Africa in this photo-like image captured on September 4, 2008. The Moderate Resolution Imaging Spectroradiometer (MODIS) on NASA’s Terra satellite captured the image at 11:20 a.m. local time (12:20 UTC). At that time, the storm had winds estimated between 83 and 93 km/hr (52 and 58 mph, or 45 and 50 knots). The weak storm consists of loose bands of clouds roughly arranged in a circular shape in this image. Josephine was forecast to weaken slightly as it moved west across the Atlantic Ocean.