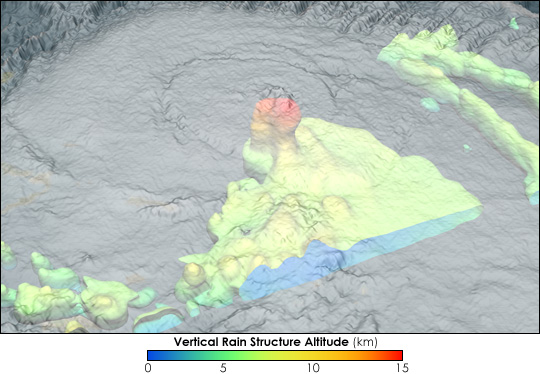 The Tropical Rainfall Measuring Mission (TRMM) satellite acquired this view of Tropical Storm Hanna on September 1, 2008, at 10:18 a.m. EDT. At this time, Hanna was a tropical storm with sustained winds estimated at 90 kilometers per hour (60 miles per hour, or 50 knots) and a pressure reading of 994 millibars. Three hours later, the National Hurricane Center upgraded the storm to a Category 1 hurricane with sustained winds of 70 knots and a pressure reading of 984 millibars. TRMM documented one reason for this rapid intensification—strong thunderstorms with heights of over 15 kilometers in the eastern eyewall of this tropical storm.

In these towering thunderstorms, or tall towers, air is rising rapidly and water vapor is condensing into cloud droplets and releasing heat into the storm. The heating, known as latent heating, adds buoyancy to the air. The subsequent rising of air lowers a storm’s central air pressure, which drives the storm’s circulation. By causing the pressure to drop, latent heating and convection cause the storm to intensify.

As a result, tall towers are a good indicator that a storm is about to intensify. Hanna did intensify a short time after TRMM observed the towering thunderstorms near the storm’s eye. The height of the cloud is defined by rainfall; the heavier the rainfall, the taller the cloud. At least one cloud tower was producing rain at a rate of about 50 millimeters per hour (red), which suggests an altitude of at least 15 kilometers.

TRMM carries the Precipitation Radar, the first space-based instrument to provide a three-dimensional view of rainfall. In this image, the cloud cover is from TRMM’s Visible and Infrared Scanner and the GOES spacecraft. The rain structure is from TRMM’s Tropical Microwave Imager and TRMM's Precipitation Radar instruments. TRMM is a joint mission between NASA and the Japan Aerospace Exploration Agency (JAXA) designed to monitor and study tropical rainfall.

An animation and additional images are available from the Scientific Visualization Studio at NASA Goddard Space Flight Center.

On August 28, 2008, the eighth named storm of the 2008 Atlantic hurricane season got underway in the Caribbean Sea. Hanna made landfall on the East Coast as a tropical storm on September 6.