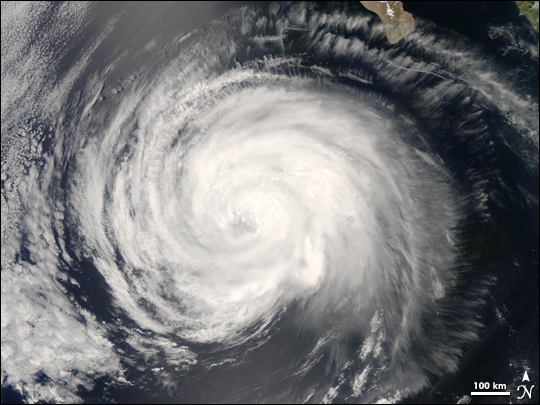 Hurricane Fausto formed in the eastern Pacific Ocean off Central America on July 16, 2008. Traveling westward over warmer waters, the storm gathered strength, reaching hurricane status by July 18, and peaking as a Category 2 hurricane on July 21, with sustained winds of 160 kilometers per hour (100 miles per hour), according to Unisys Weather.

This satellite image, obtained by the Moderate Resolution Imaging Spectroradiometer (MODIS) on NASA’s Aqua satellite, shows Hurricane Fausto as it appeared at 12:55 p.m. local time (20:55 UTC) on July 20, 2008. Fausto was a moderate-strength hurricane at the time, with well-defined arms, a tight spiral shape, and a distinct but cloud-filled central eye.

Because of the prevailing easterly winds, hurricanes that form off the Pacific Coast of Mexico and Central America tend to travel westward into the open ocean without making any significant landfall. They gradually lose strength as they arc northward and encounter cooler surface waters in the open ocean. Fausto was following this pattern on the morning of July 22; it had traveled quite far from the coastal areas where it first formed and had been downgraded to a tropical storm. Forecasts at that time were anticipating that it would collapse to tropical depression status in the following 36 hours.