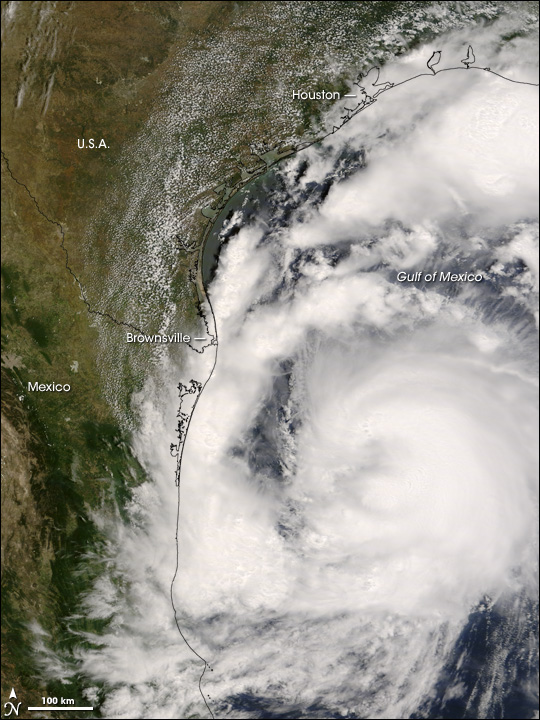 Tropical Storm Dolly formed in the Caribbean Sea between Honduras and Cuba on July 20, 2008. The storm system crossed the Yucatan peninsula, and re-organized as it crossed the Gulf of Mexico. As of the morning of July 23, it had strengthened to a minimal Category 1 storm. Dolly was expected to come ashore near Brownsville, Texas, which sits on the border between the United States and Mexico.

This natural-color satellite image, obtained by the Moderate Resolution Imaging Spectroradiometer (MODIS) on NASA’s Terra satellite, shows Tropical Storm Dolly as it appeared at 12:35 p.m. local time (17:35 UTC) on July 22, 2008, a few hours before the storm reached hurricane status. While Dolly has the spiral structure of a hurricane, it still lacks the central eye (though traces of it can be seen here). The spiraling cloud structure has a number of irregularities, including a strong but separate band of thunderstorms in one arm of the storm to the north. These storms threaten Texas coastal regions as far north as Houston.

In both northern Mexico and southern Texas, hurricane warnings advised local residents and businesses to batten down to protect property. According to the Associated Press, officials were particularly concerned about the possibility of substantial flooding associated with the storm, with predictions of storm surge along the coast of two meters (six feet), plus a reasonably high probability of heavy rains, perhaps 25 to 50 centimeters (10 to 20 inches).

Tropical Storm Dolly formed in the Caribbean Sea between Honduras and Cuba on July 20, 2008. By July 23, it was a Category 1 hurricane in the Gulf of Mexico.