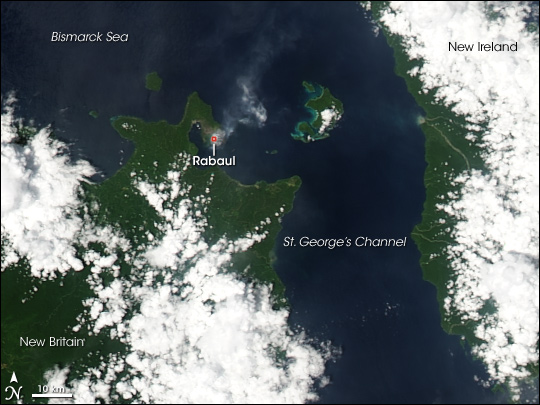 Rabaul Volcano on the island of New Britain released a plume on February 3, 2008. The Moderate Resolution Imaging Spectroradiometer (MODIS) on NASA’s Aqua satellite took this picture the same day. This image shows a pale gray plume blowing away from the volcano toward the northeast. The plume can be distinguished from the nearby clouds by both its slightly darker color and diffuse shape. The red outline at the volcano’s summit is a hotspot indicating unusually warm surface temperatures, no doubt resulting from the volcano’s activity.

Rabaul Volcano is a pyroclastic shield volcano composed of rock fragments, volcanic ash, and other material formed by earlier eruptions. The volcano sits at the end of the Gazelle Peninsula on the northeast end of New Britain. A 1994 eruption of this volcano forced the temporary evacuation of Rabaul City.

New Britain sports three volcanoes that are regularly active: Langila, Ulawun, and Rabaul. Occasionally, all three volcanoes act up at once. Around the same time that Rabaul released this plume, the U.S. Air Force Weather Agency released reports of activity from Ulawun Volcano. Rabaul’s powerful 1994 eruption occurred at the same time as two other volcanoes, Vulcan and Tavurvur, erupted.