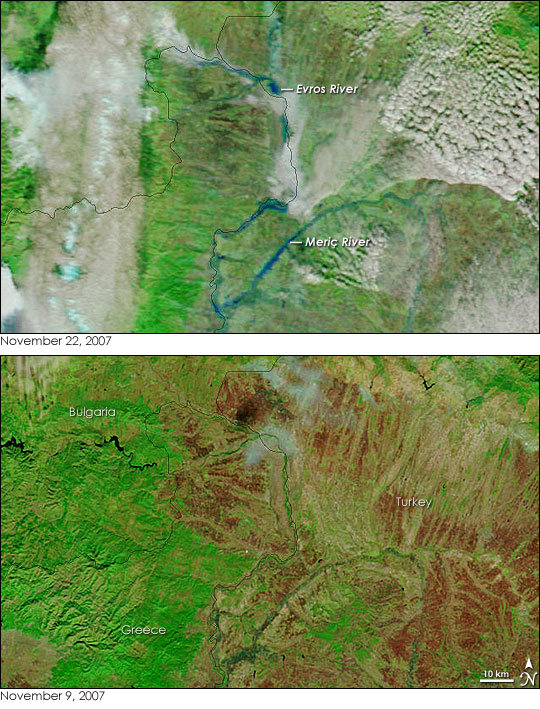 Days of heavy rain triggered floods across parts of western Turkey, eastern Greece, and southeastern Bulgaria in November 2007. The Moderate Resolution Imaging Spectroradiometer (MODIS) flying on NASA’s Terra satellite captured the top image of floods in the border region of the three countries on November 22. The Evros River, called the Meriç River in Turkey, flows from Bulgaria south along the border between Turkey and Greece and into the Aegean Sea. Normally visible only by the strip of green vegetation that lines the river’s banks, the river paints a wide blue line along the border. Flowing into the Evros/Meriç from the east, the Ergene River is similarly flooded, as are a number of other tributaries, including the Ardas.

Both the November 22 image and the November 9 image (provided to show the rivers under normal conditions) were made with a combination of visible and infrared light. This combination allows water, even murky flood water, to stand out from the land. Water is black, though in this case, mud colors the water blue. Reminders of the storm that caused the floods, white and pale blue clouds are scattered over the flood scene. Plant-covered land is bright green, and bare earth is tan. The bare rocks of the mountainous landscape were brick red on November 9, but at least partly covered over by plants by November 22.

Hundreds of homes and businesses flooded in the Evros region of Greece, forcing the evacuation of two villages, said the Dartmouth Flood Observatory. Outside of the area shown in this image, additional flooding inundated the cities of Bodrum and Marmaris in western Turkey and the Montana region of Bulgaria.

Daily images of Turkey, Greece, and Bulgaria are available from the MODIS Rapid Response System.