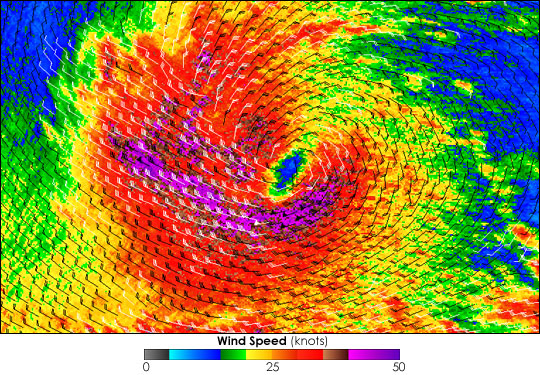 Spinning winds around a center of calm defines Tropical Storm Noel in this colorful image, created with data collected by NASA’s QuikSCAT satellite. The satellite records wind speed and direction over the ocean by sending radar pulses toward the ocean’s surface and measuring the strength of the return signal. By mapping the disturbances on the ocean’s surface, scientists can estimate how hard and in which direction the wind is blowing.

In this image of Tropical Storm Noel, taken on October 28, 2007, the strongest winds are in the south and west side of the storm and are depicted in purple. A broad area of red points to strong winds, and yellow, green, and blue indicate slower wind speeds. The barbs illustrate wind direction, and white barbs show where rainfall was heaviest. The winds circle around a calm center, depicted in blue. The heaviest rainfall corresponds with the strongest winds in the west side of the storm.

Tropical Storm Noel was the sixteenth tropical system to develop in the Atlantic Basin in 2007. Though it was never a strong storm in terms of wind speed, it posed significant danger to the Dominican Republic and Haiti. The slow-moving storm dumped heavy rain on the mountainous Caribbean island that is divided between the two nations. The resulting floods and mudslides killed 25 people in the Dominican Republic with many more still missing, reported CNN on October 30. After striking the Dominican Republic, Noel moved north over Cuba. The National Hurricane Center forecast that the storm would continue northeast over the Bahamas, strengthening slightly, and then weaken as it tracked north over cooler waters.