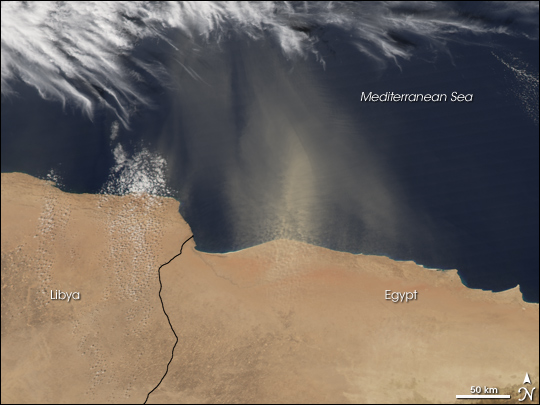 A dust storm blew off the coast of Egypt and over the Mediterranean Sea on October 20, 2007. The same day, the Moderate Resolution Imaging Spectroradiometer (MODIS) on NASA’s Aqua satellite captured this image of the storm near the Egypt-Libya border. The dust mimics the color of Egypt’s sandy terrain, thinner plumes running parallel to the thickest plume blowing out of western Egypt. A much thinner plume blows off the coast of Libya.

Dust Storm over Egypt and Libya

Thick dust defines a storm system over Egypt in this natural-color image from May 27, 2010.

Dust Storm over Egypt and Libya

Lighter in color than the desert beneath it, a large dust storm curls in a comma shape over Egypt and Libya in this natural-color image from May 26, 2010.