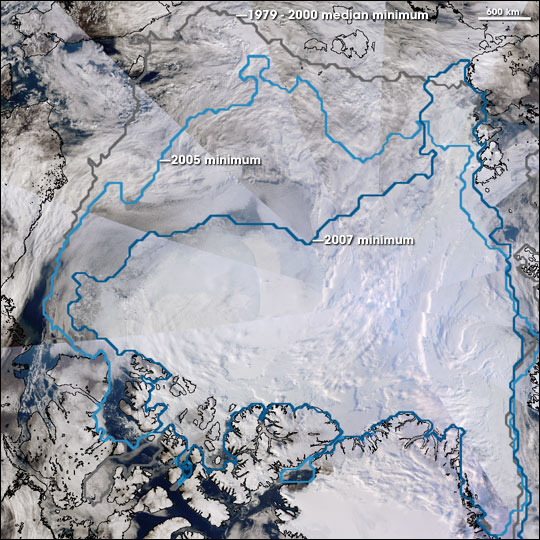 On September 15, 2007, at the time of the Arctic sea ice minimum, the Moderate Resolution Imaging Spectroradiometer (MODIS) on NASA’s Terra satellite captured an unusually clear view of the open Northwest Passage. Although clouds appeared over some of the Arctic in mid-September, skies were clear enough to allow Terra’s MODIS sensor to observe much of the sea ice and open ocean throughout the Arctic.

This image is a mosaic of Terra observations of the Arctic, taken on September 15-16, 2007. Overlaid onto the image are sea ice minima from 2007 (medium blue), the previous record low from 2005 (light blue), and the long-term average from 1979-2000 (gray). The 2007 minimum, which correlates closely with the ice visible through clouds in this image, fell substantially below previous records. In 2007, all Arctic sea ice records were broken by August, more than a month before the end of melt season.

The high-resolution version of this image appears at a resolution of 500 meters.