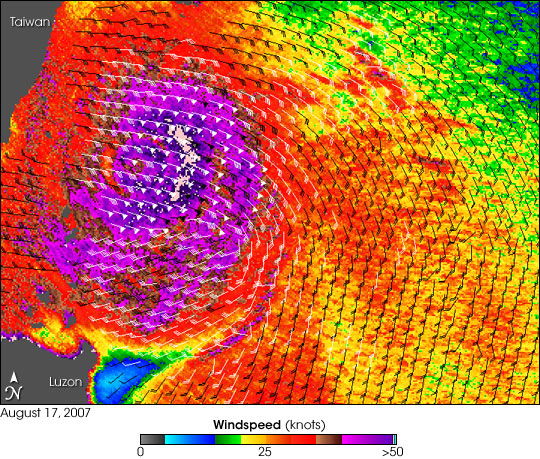 Super Typhoon Sepat came ashore in Taiwan on August 17, 2007, after bringing torrential rain and flooding to the Philippines the day before. Flights to and from Taipei, Taiwan’s capital, were canceled, and Chinese authorities were taking emergency measures in anticipation of the powerful typhoon coming ashore on the mainland, said news reports. The typhoon reached Category 5 typhoon, the very top of the scale, with sustained winds of 184 kilometers per hour (114 miles per hour), according to CNN.

This data visualization of the storm shows observations from the QuikSCAT satellite on August 17, 2007, at 5:39 p.m. local time (9:39 UTC). At this time, Sepat was poised to come ashore onto Taiwan. Peak winds were around 220 km/hr (130 mph; 120 knots), according to Unisys Weather’s Hurricane Information page, a Category Four strength typhoon. The image depicts wind speed in color and wind direction with small barbs. White barbs point to areas of heavy rain.

QuikSCAT measurements of the wind strength of Sepat and other tropical cyclones can be slower than actual wind speeds. QuikSCAT’s scatterometer sends pulses of microwave energy through the atmosphere to the ocean surface and measures the energy that bounces back from the wind-roughened surface. The energy of the microwave pulses changes depending on wind speed and direction.

Super Typhoon Sepat came ashore in Taiwan on August 17, 2007, after bringing torrential rain and flooding to the Philippines the day before.