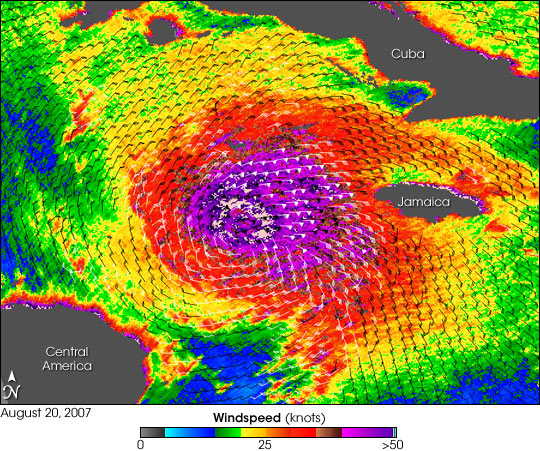 The 2007 Atlantic hurricane season had three named storms, but no hurricanes until the middle of August, when Tropical Storm Dean formed. By August 20, when the QuikSCAT satellite captured the data used to make this image, Dean was an extremely powerful Category 4 hurricane. The image depicts wind speed in color and wind direction with small barbs. White barbs point to areas of heavy rain. The center of the storm is dominated by purple, indicating high wind speeds. Pale pink circles the eye where winds were off the scale. Dark red and orange areas spread some distance from the eye: Dean was a large and powerful storm.

Dean began as a wave-like disturbance in the cloud bands off South America, which gathered together to form a storm system on August 13. By August 18, Dean had grown in power to become a Category 4 hurricane, swirling in the Caribbean Sea. The storm caused great damage to Jamaica and Grand Cayman Island, among other Caribbean islands, and as of August 19, it was forecast to come ashore on the Mexican Yucatan Peninsula not far from the border with Belize. Forecasters at the National Hurricane Center were also expecting the storm to continue to gather power to Category Five strength.

When QuikSCAT measured the storm on August 20, 2007, at 8:04 a.m. local time (14:04 UTC), Dean was in the Gulf of Mexico between Cuba, Jamaica, and the Central American peninsula heading towards the Yucatan Peninsula. Peak winds were around 240 kilometers per hour (150 miles per hour; 130 knots) at this time, according to Unisys Weather’s Hurricane information, making Dean a powerful Category Four hurricane.

QuikSCAT measurements of the wind strength of Dean and other tropical cyclones can be slower than actual wind speeds. QuikSCAT’s scatterometer sends pulses of microwave energy through the atmosphere to the ocean surface and measures the energy that bounces back from the wind-roughened surface. The energy of the microwave pulses changes depending on wind speed and direction.