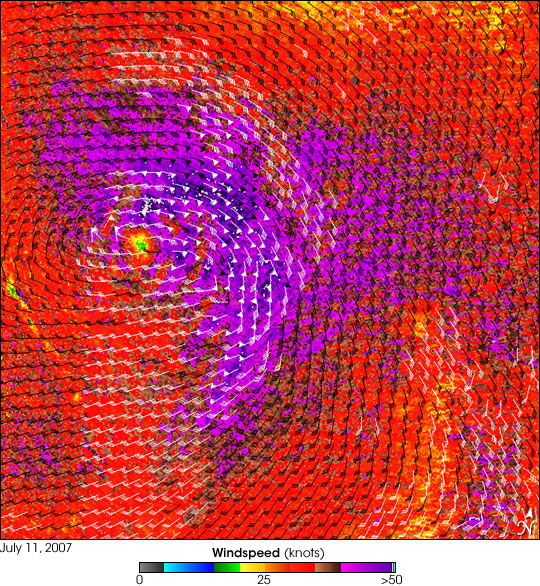 Typhoon Man-yi was the fourth named storm of the western Pacific’s typhoon season. Man-yi started as a tropical depression in the western Pacific on July 8, 2007, among the islands of Micronesia. The storm gradually built power to typhoon status on July 10. As of July 11, forecasters were calling for Man-Yi to strengthen to Category 4 (Super Typhoon) status, with sustained winds in the storm’s core predicted to reach at least 210 kilometers per hour (131 miles per hour).

This data visualization of the storm shows observations from the QuikSCAT satellite on July 11, 2007, at 09:00 UTC (7:00 p.m. local time). At this time, Man-Yi appeared as a well-developed typhoon; its peak winds were around 165 km/hr (110 mph; 95 knots). The image depicts wind speed in color and wind direction with small barbs. White barbs point to areas of heavy rain.

QuikSCAT measurements of the wind strength of Man-Yi and other tropical cyclones can be slower than actual wind speeds. QuikSCAT’s scatterometer sends pulses of microwave energy through the atmosphere to the ocean and measures the energy that bounces back from the wind-roughened surface. The energy of the microwave pulses changes depending on wind speed and direction.