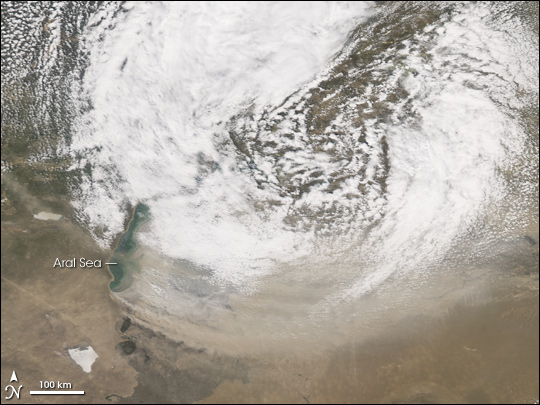 A massive dust storm blew through central Asia on May 7, 2007. The Moderate Resolution Imaging Spectroradiometer (MODIS) on NASA’s Aqua satellite took this picture the same day, capturing the dust sweeping in a counterclockwise direction east of the Aral Sea. In this image, the dust appears as a pale beige swath immediately south of a large bank of clouds. The dust mimics the movement of the clouds, and both clouds and dust may have resulted from the same weather system.

Although a few plumes originate to the west, most of the dust plumes originate along the shores of the South Aral Sea. The dry lake beds surrounding the South Aral Sea provide ample material for dust storms. The sea began retreating in the 1960s. Although the North Aral Sea had rebounded somewhat by the spring of 2007, thanks to conservation efforts, the southern portion of this massive lake continued to decline.

You can download a 250-meter-resolution Central Asia KMZ file for use with Google Earth.